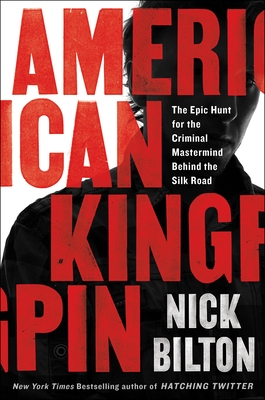 The Epic Hunt for the Criminal Mastermind Behind the Silk Road

NEW YORK TIMES BESTSELLER. The unbelievable true story of the man who built a billion-dollar online drug empire from his bedroom—and almost got away with it

It wasn’t long before the media got wind of the new Web site where anyone—not just teenagers and weed dealers but terrorists and black hat hackers—could buy and sell contraband detection-free. Spurred by a public outcry, the federal government launched an epic two-year manhunt for the site’s elusive proprietor, with no leads, no witnesses, and no clear jurisdiction. All the investigators knew was that whoever was running the site called himself the Dread Pirate Roberts.

The Silk Road quickly ballooned into $1.2 billion enterprise, and Ross embraced his new role as kingpin. He enlisted a loyal crew of allies in high and low places, all as addicted to the danger and thrill of running an illegal marketplace as their customers were to the heroin they sold. Through his network he got wind of the target on his back and took drastic steps to protect himself—including ordering a hit on a former employee. As Ross made plans to disappear forever, the Feds raced against the clock to catch a man they weren’t sure even existed, searching for a needle in the haystack of the global Internet.

Drawing on exclusive access to key players and two billion digital words and images Ross left behind, Vanity Fair correspondent and New York Times bestselling author Nick Bilton offers a tale filled with twists and turns, lucky breaks and unbelievable close calls. It’s a story of the boy next door’s ambition gone criminal, spurred on by the clash between the new world of libertarian-leaning, anonymous, decentralized Web advocates and the old world of government control, order, and the rule of law. Filled with unforgettable characters and capped by an astonishing climax, American Kingpin might be dismissed as too outrageous for fiction. But it’s all too real.

Praise For American Kingpin: The Epic Hunt for the Criminal Mastermind Behind the Silk Road…

“An astonishingly well-researched narrative… Bilton's storytelling bears not so much as a trace of fat; the book he's conjured is so sharp and bright that it can be whipped through in the airport lounge before the flight takes off."
—The Globe and Mail

“I dare you not to read this book in one sitting. Masterfully reported and written, Bilton’s book drops you hard into the dark heart of the most famous Internet crime to date. A first-rate thrill.”
—JOSHUA COOPER RAMO, author of The Seventh Sense

“Nick Bilton has issued a fantastic modern true-crime thriller. The book moves at a stunning pace while packed full of exquisite reporting and detail. It delivers a vivid pic­ture of what happens when genius, ambition, and depravity collide, as well as a study on the complex interplay between good and evil.”
—ASHLEE VANCE, author of Elon Musk

“Engrossing, addictive, suspenseful, riveting—this book hooked me on page one and I could not put it down. American Kingpin is the best thing I’ve read in ages. I can’t recommend it highly enough.”
—DAN LYONS, author of Disrupted

“In American Kingpin, Nick Bilton again proves why he’s one of tech’s best storytellers with a stunningly researched and very scary portrait of the creator of a marketplace gone mad, and the oddly uncoordinated officers who took him down.”
—STEVEN LEVY, author of Hackers and In the Plex

“You’ll never forget Bilton’s portrait of the brilliant and brazen Ross Ulbricht, even after you sacrifice sleep in a sprint to the final pages and to see justice served.”
—BRAD STONE, author of The Everything Store and The Upstarts

“A rollicking, deftly reported tale of the Dark Web. I couldn’t put it down.”
—CLIVE THOMPSON, author of Smarter Than You Think

“Bilton’s investigation of the Silk Road is dramatic and, at times, nearly unbelievable. It puts your favorite thriller novels to shame.”
—STEVEN PRESSFIELD, author of Gates of Fire

“Nick Bilton is the only writer who could tell this suspenseful story. American Kingpin is engrossing at every turn, right up to its pulse-racing ending.”
—ADAM LASHINSKY, author of Wild Ride

“American Kingpin is both a staggering feat of investigative journalism and a triumph of edge-of-your-seat storytelling. This is what true-crime writing should be.”
—BRYAN BURROUGH, author of Days of Rage

"A fast-paced, readable true-crime tale that frames the likely future of the underground economy."
—Kirkus Reviews

Nick Bilton is a special correspondent for Vanity Fair, where he writes about technology, business, and culture, and a contributor at CNBC. He was a columnist for The New York Times for almost a decade. His most recent book, Hatching Twitter, was a New York Times bestseller. He lives in Los Angeles with his wife, son, and dog, Pixel.
Loading...
or
Not Currently Available for Direct Purchase