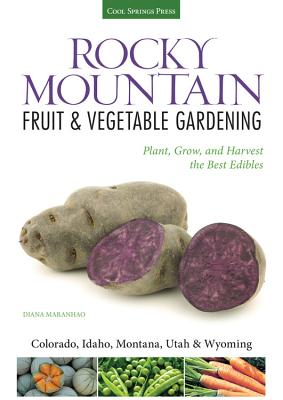 Master the art of edible gardening in one of the United States' most breathtaking landscapes. If you're interested in growing your own fruits and vegetables, you've joined the ranks of a blossoming group of Do-It-Yourself gardeners who place a premium on the idea of self-reliance. But like any other kind of gardening, growing edibles is not a one-size-fits-all pursuit: in order to be successful, you'll need to know not only which plants grow well in your state or region, but also how to grow them with careful methods and a schedule that caters specifically to your local climate. Fortunately for you, Rocky Mountain Fruit & Vegetable Gardening is written exclusively for gardeners who want to grow edibles in Montana, Wyoming, Idaho, Utah, or Colorado. Author Diana Maranhao relies on her extensive gardening knowledge and familiarity with the Rocky Mountain region to equip you with all the information you need to design your edible garden, tend the soil, maintain your plants throughout their life cycles, and--most importantly--harvest the delicious foods they produce. So whether you live near the Big Horn Mountains, on the Front Range, along the Green River, or anywhere else in the Rocky Mountain region, you'll discover the best fruit and vegetable plants for your garden in this beautiful step-by-step how-to guide . . . and they'll be on your table before you know it.

Diana (Dee) Maranhao has been an active member of the horticulture and landscape industry for more than 35 years. She holds a degree in Ornamental Horticulture, and is a credentialed teacher in California, specializing in Ornamental Horticulture. Diana has spent much of her career in higher education, serving as a Horticulture Program Manager, Nursery Production Specialist, and educator specializing in Xeriscape-Low Water Use Landscaping, Nursery Production, and Plant Propagation.

Diana has also been a horticulture editor and project editor for numerous educational texts, magazines, garden guides, and horticulture books. She has been a regularly featured garden columnist for more than ten years, authoring hundreds of gardening and horticulture articles for the public and the horticulture industry. Diana is also the author of Rocky Mountain Fruit and Vegetable Gardening (Cool Springs Press, 2014). She received the "2014 Professional of the Year" Award from Southwest Trees & Turf Magazine at Desert Green XVIII Conference in Las Vegas.