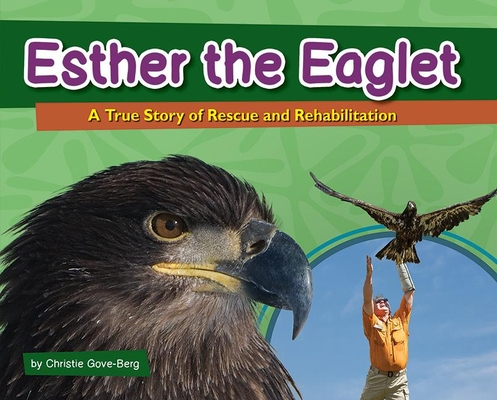 A True Story of Rescue and Rehabilitation (Wildlife Rescue Stories)

The True Story of a Bald Eagle's Fall and Rescue

Esther the eaglet is learning to fly when she falls from her nest. She is alone and injured. Who will help the baby eagle? With real bald eagle pictures, this true story explains how raptor centers and rehabilitation teams rescue and treat injured birds. Their goal is to release bald eagles and other birds back into the wild to live successful, natural lives. Esther's story is just such a success

Award-winning author Christie Gove-Berg wrote this picture book after her mom and dad found the injured eaglet hopping along on their land. The Raptor Center at the University of Minnesota helped in Esther's rescue and rehabilitation, and they assisted in ensuring this book's accuracy. Part of the proceeds from the sale of Esther the Eaglet will benefit the Raptor Center.

Christie Gove-Berg loves nature and wildlife. Her first book, Esther the Eaglet, was written after the rescue of an injured eaglet on her parents' land. Her second book in the series, Maggie the One-Eyed Peregrine Falcon, was inspired by a young bird that was injured while learning to fly in the middle of a big city. (Now Maggie is an educational bird at The Wildlife Center of Virginia, teaching people about raptors.) Christie's regional book, Minnesota Must-See for Families, encourages families to document their Minnesota adventures together. Christie donates a portion of the profits from her raptor books to The Raptor Center at the University of Minnesota and The Wildlife Center of Virginia. When she has free time, Christie enjoys writing, reading, cooking, hiking, and camping. Her perfect day would be a kayak ride to a sandy beach on the St. Croix River with her friends and family. And lots of laughter.
or support indie stores by buying on
Copyright © 2020 American Booksellers Association