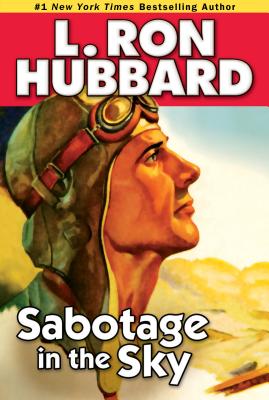 Sabotage in the Sky (Paperback)

A Heated Rivalry, a Heated Romance, and High-Flying Danger (Stories from the Golden Age)

Bill Trevillian is as ruggedly handsome as he is bold and brave. Kip Lee is as strikingly beautiful as she is fiery and fearless. And they've got something in common. They're both test pilots ... for rival aviation companies. Put them together and sparks are bound to fly.
The Second World War is raging in Europe, and England and France are looking to America for a fighter plane to match up with the superior Nazi Messerschmitt. The competition between Bill and Kip is fierce, and the stakes are stratospheric. Because there's an added element in the mix: a deadly saboteur.
People say all's fair in love and war, but when there's Sabotage in the Sky, the flight path from heated rivalry to heated romance could lead Bill and Kip to crash and burn.

With 19 New York Times bestsellers and more than 230 million copies of his works in circulation, L. Ron Hubbard is among the most acclaimed and widely read authors of our time. As a leading light of American Pulp Fiction through the 1930s and '40s, he is further among the most influential authors of the modern age. Indeed, from Ray Bradbury to Stephen King, there is scarcely a master of imaginative tales who has not paid tribute to L. Ron Hubbard.

Praise For Sabotage in the Sky: A Heated Rivalry, a Heated Romance, and High-Flying Danger (Stories from the Golden Age)…

“…L. Ron Hubbard was a skilled and prolific author of the legendary ‘golden age’ of pulp fiction magazines. Now Galaxy Press is reprinting those long out of print Hubbard action/adventure tales as part of their ‘Stories from the Golden Age’ series. Sabotage in the Sky is one Hubbard’s stories based on then advanced technologies of aircraft and powered flight and was originally published in 1940. It has everything from a love interest, to ruthless competition within the aviation industry that includes the prospect of Nazi sabotage, riveting cliff-hanger action, and the colorful aviation patois of the period. Also highly recommended for aviation action/adventure pulp fiction fans are such other newly published Galaxy Press titles by L. Ron Hubbard as On Blazing Wings; Red Death Over China; Sky Birds Dare!; and Trouble on His Wings.”
—Midwest Book Review