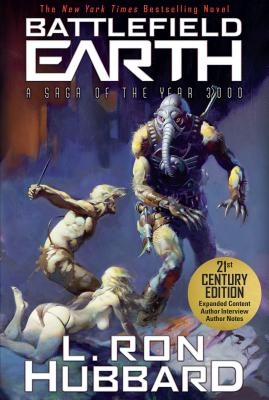 Only 35,000 humans remain... ...and the aliens hunt them for sport. Who will lead the uprising? In the year A.D. 3000, Earth is a dystopian wasteland. The great cities stand crumbling as a brutal reminder of what we once were. When the Psychlos invaded, all the world's armies mustered little resistance against the advanced alien weapons. Now, the man animals serve one purpose. Do the Psychlos' bidding or face extinction. One man, Jonnie Goodboy Tyler, has a plan. They must learn about the Psychlos and their weapons. He needs the other humans to follow him. And that may not be enough. Can he outwit his Psychlo captor, Terl? What is their weakness? The fate of the Galaxy lies on the Battlefield of Earth. This is one of the finest examples of science fiction ever written, with nuance, sub-plots, and action all the way through. A masterpiece at over 1,000 pages. You'll love this epic New York Times bestseller by L. Ron Hubbard, because his vision of science fiction was ahead of its time. Get it now. "Pulse-pounding mile-a-minute sci-fi action-adventure that does not stop. It is a masterpiece of popular adventure science fiction." --Brandon Sanderson "Battlefield Earth is like a 12-hour 'Indiana Jones' marathon. Non-stop and fast-paced. Every chapter has a big bang-up adventure." --Kevin J. Anderson (co-author of the Dune Sagas) "Over 1,000 pages of thrills, spills, vicious aliens and noble humans. I found Battlefield Earth un-put-downable." --Neil Gaiman

Praise For Battlefield Earth: A Saga of the Year 3000…

"In the year 3000, Earth has been conquered by nine-foot-tall, gas-breathing alien invaders called Psychlos. The few surviving humans are treated as nothing more than pack animals worked to death mining the Earth of all its resources. But a small band of rebel humans, led by Jonnie Goodboy Tyler, vow to fight back against impossible odds and reclaim their planet.
"In the book's introduction, Hubbard states: "When I started out to write this novel, I wanted to write pure science fiction. Science is for people. And so is science fiction." If "Battlefield Earth"'s phenomenal worldwide popularity is any indication almost 7 million copies sold in 26 different languages -- it's safe to say that he succeeded. Considering the quality of the story ("Battlefield Earth" was voted as one of the top three English-language novels of the 20th century in a nationwide Modern Library reader's poll) and the tender loving care that went into the production, this 20th anniversary edition is more than pure science fiction. It's pure literary gold." Paul Goat Allen - Barnes & Noble

"A terrific story." Robert A. Heinlein

"The pace starts fast and never lets up." Atlanta Journal-Constitution

"If you like the kind of fast, unrelenting 'Raiders of the Lost Ark' action, then this is the book for you. It's a real page turner." Rocky Mountain News

With 19 New York Times bestsellers and more than 230 million copies of his works in circulation, L. Ron Hubbard is among the most acclaimed and widely read authors of our time. As a leading light of American Pulp Fiction through the 1930s and '40s, he is further among the most influential authors of the modern age. Indeed, from Ray Bradbury to Stephen King, there is scarcely a master of imaginative tales who has not paid tribute to L. Ron Hubbard.
Loading...
or support indie stores by buying on