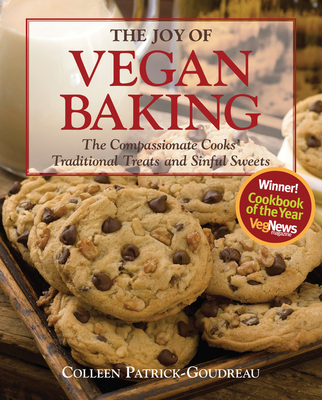 The Joy of Vegan Baking

Whether you want to bake dairy- and egg-free for health, ethical, or environmental reasons, The Joy of Vegan Baking lets you have your cake and eat it, too! Featuring 150 familiar favorites -- from cakes, cookies, and crepes to pies, puddings, and pastries -- this book will show you just how easy, convenient, and delectable baking without eggs and dairy can be.

A seasoned cooking instructor and self-described "joyful vegan," author Colleen Patrick-Goudreau puts to rest the myth that vegan baking is an inferior alternative to non-vegan baking, putting it in its rightful place as a legitimate contender in the baking arena. More than just a collection of recipes, this informative cookbook is a valuable resource for any baker -- novice or seasoned.

Learn just how easy it is to enjoy your favorite homespun goodies without compromising your health or values:

Free of saturated fat, cholesterol, and lactose, but full of flavor, flair, and familiarity, each and every recipe will have you declaring I can't believe it's vegan!

Complete with luscious color photos, this book will be an essential reference for every vegan.


Praise For The Joy of Vegan Baking: The Compassionate Cooks' Traditional Treats and Sinful Sweets…

"Colleen Patrick-Goudreau blends the perfect mix of stories, photos, and recipes with amazing grace and taste. Her words will open your heart; her recipes will fill your tummy." ~VegNews Magazine

Ã¿Vegan baking comes of age with this collection of baked delights. Colleen Patrick-Goudreau has put together a comprehensive tome that is sure to be useful to baking novices as well as those of us who've been wielding the whisk for years."~Isa Chandra Moskowitz, Author of Vegan with a Vengeance and Vegan Cupcakes Take Over the World

Ã¿At last! A cookbook that delivers the secrets of vegan cuisine's last frontier: baking delicious desserts. Elegant, fun, well-organized, complete, and compelling, this is a masterpiece you'll treasure for yourself and want to give to your friends.Ã¶ Ã¹Will Tuttle, Ph.D., Author of The World Peace Diet

A recognized expert and thought leader on the culinary, social, ethical, and practical aspects of living vegan, Colleen Patrick-Goudreau is an award-winning author of seven books, including the bestselling The Joy of Vegan Baking, The Vegan Table, Color Me Vegan, Vegan's Daily Companion, On Being Vegan, and The 30-Day Vegan Challenge. She is an acclaimed speaker and beloved host of the inspiring podcast "Food for Thought," which was voted Favorite Podcast by VegNews magazine readers.

Colleen has appeared on national and regional TV programs--including the Food Network, CBS, PBS, and FOX. Interviews with her have been featured on NPR, Huffington Post, U.S. News and World Report, The Chicago Tribune, The Miami Times, Pacifica Radio, and Rodale News--and in countless publications, blogs, and podcasts.

Her recipes have been featured on Epicurious.com and Oprah.com, and she is a featured guest on Delicious TV's Vegan Mashup, a program that recently aired on public television in 41 states. Colleen is a regular contributor to Perspectives on KQED, NPR's San Francisco affiliate, which reaches 830,000 listeners weekly.