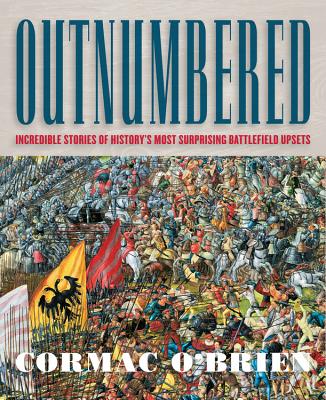 Outnumbered but not Outmatched.
How did Hannibal’s 55,000 Carthaginians turn the tables on an 80,000-strong force of the ancient world’s most efficient military machine, the Roman army? What allowed 6,000 Englishmen to overcome 30,000 French at Agincourt in 1415? Which errors in judgment doomed a Russian army twice as large as its opposing German force at the Battle of Tannenberg during World War I?
Author Cormac O’Brien’s powerful and vivid recreations of history’s most surprising military victories illuminate the cunning strategies, secret weapons, fateful decisions, and changes of fortune that turned the tide of battle in the most extraordinary and unanticipated ways: the risky Greek ruse that trapped the Persian Fleet at Salamis in 480 BCE; the snowstorm that helped a Swedish force destroy a Russian army four times its size at the Battle of Narva in 1700; the newly introduced firearm that enabled 150 British soldiers to hold off an attacking horde of 4,000 Zulus at Rorke’s Drift, Africa, in 1879.
Even a commander as fearless, self-assured, and battle-hardened as Alexander the Great, leading 40,000 Macedonian troops, must have quailed at the sight that met him as he neared the village of Issus, Asia Minor, in 333 BCE: an unexpectedly and unimaginably vast Persian force of some 100,000 men, spanning the Mediterranean coastal plain as far as the eye could see. For warfare had already demonstrated, and has confirmed ever since, that numerical superiority consistently carries the day. And yet, every once in a while, such lopsided engagements have had an unexpected outcome, and proved to be a crucible in which great leaders, and history, are forged.
Outnumbered chronicles fourteen momentous occasions on which a smaller, ostensibly weaker force prevailed in an epochal confrontation. Thus, Alexander, undaunted, devised a brilliant and daring plan that disoriented and destroyed the Persian force and, consequently, its empire. Likewise, during the U.S. Civil War, Confederate General Robert E. Lee, despite being outpositioned and outnumbered more than two to one by Union forces at Chancellorsville, Virginia, hatched an audacious and surprise strategy that caught his enemy completely unawares. Other equally unexpected, era-defining victories are shown to have derived from the devastating deployment of unusual weaponry, sheer good fortune, or even the gullibility of an enemy, as when Yamashita Tomoyuki, commander of 35,000 ill-supplied Japanese troops, convinced the 85,000-strong British Commonwealth army to surrender Singapore in 1942.
Together these accounts constitute an enthralling survey that captures the excitement and terrors of battle, while highlighting the unpredictable nature of warfare and the courage and ingenuity of inspired, and inspiring, military leaders. A thrilling tour of the battlefields of history, replete with dramatic encounters, sudden twists of fate, and intriguing character studies, Outnumbered demonstrates that, even when the odds seem insurmountable, the path to glory can still be found.

Cormac O’Brien is the author of The Forgotten History of America and Secret Lives of the U.S. Presidents, among other books. He has been a featured speaker at the Jimmy Carter Presidential Library and a regular guest on National Public Radio. He lives in New Jersey.

People love to root for the underdogs. With that in mind, O'Brien (Secret Lives of the U.S. Presidents: What Your Teachers Never Told You About the Men of the White House) here recounts tales of battles in which the smaller forces not only survived but even pulled off dramatic victories. The 14 battles discussed, arranged chronologically, cover four continents and date from anywhere between 480 B.C.E. and 1942. The snapshots of each battle, all clear and concise, demonstrate the more intriguing aspects of each engagement. Large color illustrations and maps are frequent, helping to make this a beautifully presented book. Although the bibliography is brief, the titles referenced generally represent recent scholarship. There are similar titles about decisive battles and interesting campaigns, but none quite like this. Only the absence of an overall conclusion detracts from this otherwise entertaining work. VERDICT: Accessible writing and an attractive presentation make this an appealing choice for many military history enthusiasts. - Library Journal, May 15, 2010

“There are few more powerful and inspiring stories in military history than those of small groups of soldiers facing daunting odds and triumphing in spite of them, which is why names like Salamis, Alesia, Agincourt, and Chancellorsville have been justly celebrated. Cormac O'Brien's new book Outnumbered is a white-knuckling ode to desperate battles and the men who fought them. O'Brien is a bravura writer for a bravura subject. He gives us strategy from generals and battlefield detail from blood-spattered foot soldiers. Want to know what it was like to encircled by the cream of the Roman foot and cavalry at Cannae? To be 150 holding off thousands at Rorke's Drift? And, most astoundingly, to triumph? Read Outnumbered.” —Joseph Cummins, author of The War Chronicles and The World’s Bloodiest History

“O’Brien has taken an interesting look at an old question: how does a force that's outnumbered or outgunned prevail? He looks at each battle from top to bottom: political situation, military situation, and how each force was armed, equipped, and trained. By investigating not just the generals but often overlooked factors like the influence of terrain and weather, he shows that it's not just fighting spirit or exceptional command skills but dogged determination that sometimes wins the day. A good look at both well-known and also less-famous battles, as well as the nature of warfare from ancient times to World War II.” —Paul K. Davis, author of 100 Decisive Battles

“Nowhere is leadership in all its dimensions—knowledge, craft, audacity, the ability to organize, and the capacity to inspire—more thoroughly tested than it is in combat, and in no combat is leadership put to a more extreme test than in an uneven battle, a blood contest in which one side substantially outnumbers the other. Cormac O’Brien identifies, narrates, and explores some of history’s most revelatory lopsided clashes of arms and, each time, leaves the reader with something more than a damn good story. From each encounter, we come away with a hard-won—or hard-lost—lesson in courage, will, and the application of doctrine, tactics, and strategy. We take with us a lesson in leadership against all odds.” —Alan Axelrod, author of Little-Known Wars of Great and Lasting Impact and Patton’s Drive

Fighting outnumbered and winning has been part of American military doctrine since the Cold War when we realized that we could never match the numbers that the Soviet military could put in the field. Our military philosophy became one of stressing quality over quantity. In training programs such as the Navy's "Top Gun" combat air maneuvering course and the Army's National Training Center, we emphasized superb individual and unit combat skills. In our professional military schools, our officers learned how the great masters beat numerically superior foes.

In Outnumbered, Cormac O'Brien makes an effort at a reexamination of how some of the military greats overcame all odds to win. The result is a beautifully illustrated and entertainingly written coffee table book...It is an entertaining read and holds some superb insights. It is popular history at its best; perhaps some of the chapters will find their way to the History or the Military television channels. - Washington Times, June 9, 2010 (circ.: 67,148, vpm: 4.5 million)