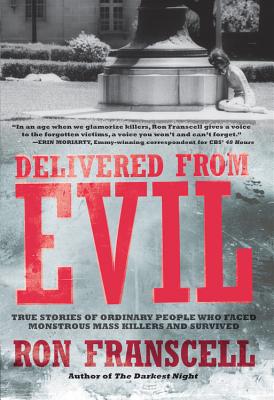 A 12-year-old boy cowers in his closet while a lunatic killer slaughters his family . . . a nursing student unwittingly opens her home to the serial killer on her front porch . . . an 11-year-old girl drifts alone at sea on a flimsy cork raft for almost four days after a mass murderer kills her vacationing family aboard a chartered yacht . . . a brave firefighter suddenly finds himself in the crosshairs of a racist sniper almost nine stories above the ground . . .

And, astonishingly, they all survived.

From Howard Unruh's 1949 shooting rampage through a quiet New Jersey neighborhood to Louisiana serial killer Derrick Todd Lee's reign of terror in 2002, the corpses piled up and few lived to tell the horror. Now, award-winning journalist Ron Franscell explores the wounded hearts and minds of the ordinary people these monsters couldn t kill. His mesmerizing accounts crackle with gritty details that put the reader in the midst of the carnage and offer a front-row seat on the complex, painful process of surviving the rest of their haunted lives. In intimate, gripping prose, Franscell takes the reader on a pulse-pounding dash through the murky intersection of pure evil and the potency of the human spirit. This journey into the darkest corners of the American crime-scape is a penetrating work of literary journalism by a writer hailed as one of the most powerful new voices in true crime.

Ron Franscell is a bestselling author and journalist whose atmospheric true crime/memoir The Darkest Night was hailed as a direct descendant of Truman Capote s In Cold Blood and established him as one of the most provocative new voices in narrative nonfiction. His work has appeared in the Washington Post, Chicago Sun-Times, San Francisco Chronicle, Denver Post, San Jose Mercury-News, St. Louis Post-Dispatch, and Atlanta Journal-Constitution. Delivered from Evil is his fifth book. He grew up in Wyoming and now lives in San Antonio, Texas. "

“In Ron Franscell’s captivating account of the darkest chapters of our history, the author skillfully reminds all of us the meaning of grace and the triumph of the human spirit.” —Gregg Olsen, New York Times bestselling author of Twisted Faith

“In an age when we glamorize killers, Ron Franscell gives a voice to the forgotten victims, a voice you won’t and can’t forget.” —Erin Moriarty, Emmy-winning correspondent for CBS’ 48 Hours