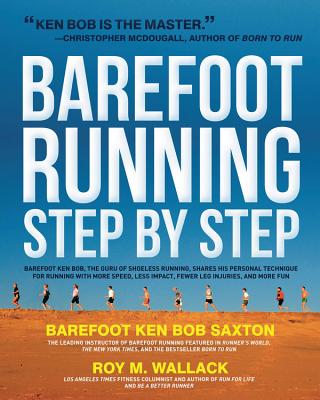 “Barefoot Ken Bob is The Master. Long before anyone else was even talking about barefoot running, he was perfecting the art . . . Now, after twenty years of teaching, experimenting, and “merry marathoning” (as he calls it), the first and best source of barefoot-running knowledge is bringing his ideas to print. And it’s about time.” —Christopher McDougall, author of Born to Run: A Hidden Tribe, Super Athletes, and The Greatest Race the World Has Never Seen

“Ken Bob Saxton, a pioneer of the modern barefoot running movement, has logged more miles in his birthday shoes than just about anyone I know, and he has helped countless people run barefoot. As one would expect, this delightful book, full of wit and wisdom, is an invaluable guide for anyone who wants to run barefoot, avoid injury, and have fun.” —Daniel E. Lieberman, professor of Human Evolutionary Biology, Harvard University

"This is a wonderful guide from the Godfather of barefoot running!" —Irene Davis, Ph.D., director of Spaulding National Running Center, Harvard Medical School

Learn Barefoot Running From the Master!

Almost overnight, barefoot running has exploded onto the fitness scene. However, it involves more than simply taking off your shoes. In fact, everything you’ve learned about barefoot running is probably wrong—unless you’ve learned it from Barefoot Ken Bob Saxton. The leading instructor and proponent of unshod running, he has completed 76 marathons barefoot, survived an astounding marathon-a-month challenge in 2004, and gone on to top that with 16 marathons in 2006, including four in a 15-day period—all barefoot.

Barefoot Running Step by Step separates the facts from the hype, outlines Ken Bob’s personal techniques, and details the latest research on the newest trend in mankind’s oldest sport. Whether you barefoot run occasionally, part-time, or full-time, you’ll find methods for improving your form, staying injury-free, dramatically improving your speed and performance, and having more fun.

The Bent Knee: Here is the hidden secret to perfect running form. Learn how this crucial adjustment will keep you running stronger and injury-free for life.

Vibrams and Minimalist Shoes: Barefoot running is not a transition from shoes to minimalist shoes to bare feet. It’s the other way around. Discover why you need to run barefoot before you use other footwear.

Start From the Head: Proper barefoot form doesn’t start at the feet. Discover how to get the correct body biomechanics.

Ease Into It: Here are the steps you need to take to make the transition from running in shoes to barefoot running as painless and easy as possible.

Barefoot Running Step by Step is filled with series photos and illustrations that show you the “do’s” and “don’ts” of barefoot running, the latest research, and Ken Bob Saxton’s personal experiences and insights for running barefoot for life.

Ken Bob Saxton is the leading instructor of barefoot running in the country, featured in Runner's World, The New York Times, and the bestseller Born to Run, by Chris McDougall, who calls Ken Bob “The Master of Barefoot Running.” He has completed more than 75 marathons barefoot (and one marathon in shoes), including running the Boston Marathon several times and surviving an astounding marathon-a-month challenge in 2004, which he topped with 16 marathons in 2006, including 4 marathons in a 15-day period—all barefoot. “Barefoot” Ken Bob, as he is popularly known, has trained thousands of people across the country in person at his workshops and educated thousands of new barefoot runners throughout the world, from Mumbai to Oslo, via his popular website www.TheRunningBarefoot.com.

Roy M. Wallack is a Los Angeles Times health and fitness columnist and former editor of Triathlete and Bicycle Guide magazines. A participant some of the world's toughest running, cycling, and multisport events, including the Boston Marathon, Badwater UltraMarathon, Eco-Challenge, La Ruta de los Conquistadores, and TransRockies Run, he finished second in the World Fitness Championship in 2004. Wallack has written for Outside, Men's Journal, Runner's World, Competitor, Bicycling, Mountain Bike, and authored The Traveling Cyclist: 20 Worldwide Tours of Discovery (1991) and Bike for Life: How to Ride to 100 (2005), an athletic longevity plan for cyclists.