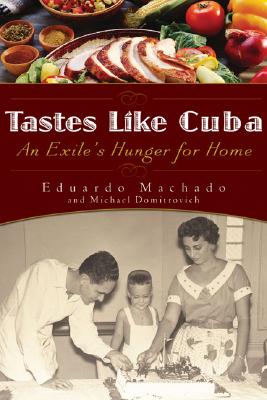 An Exile's Hunger for Home

Tastes Like Cuba is the moving account of an exile searching for the identity he's lost and becoming someone else in the process.". An internationally acclaimed playwright, Eduardo Machado has grappled with questions of identity, loss and resistance throughout his life and work. He has--more than any other playwright--been able to convey the experiences of both the Cubans who chose to stay in Cuba and those who chose to leave. His fearless style and unabashed politicism in the face of dissent have made him a controversial figure to the Cubans and Americans on opposite sides of an intense conflict.

In his memories and in his more recent travels to Cuba, he has found that the most natural means of connecting with today's Cuban experience is through food. Machado says, "When I taste something I haven't tasted in twenty years, I can't resist that connection to the past, to the conflict, to the identity that is mine. I know the feeling as I taste the flavor. There are no arguments, no political controversies, just the real sensation. If it's that complex, it must be Cuban."

To any exile, food represents not only the lost comfort of home, but the best chance to reclaim it. The stories of Machado's life--from child of privilege in pre-Revolutionary Cuba; to exile in Los Angeles; to actor, director, playwright and professor in New York--are interleaved with recipes for the meals that have enriched him. Every recipe has been updated for the modern home cook, enabling us to recreate the flavors of traditional Cuban dishes such as Machado's favorite roast pork and his grandfather's arroz con pollo, as well as the `cuisine' of necessity he encountered in 1960's suburban America: Velveeta, SPAM, and other processed wonders. What emerges is a larger picture of what it means to be a Latino in America today. For anyone who has ever longed for a home, real or imagined, Tastes Like Cuba delivers a fascinating story of two worlds--and one delectable life.