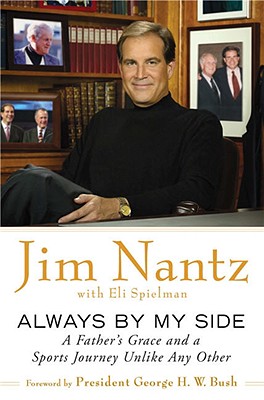 Always By My Side

A Father's Grace and a Sports Journey Unlike Any Other

In the bestselling tradition of Big Russ and Me, America's most visible sports commentator tells the stories of some of the most dramatic moments in American sports and pays tribute to the man who inspired him to pursue his broadcasting dream-- his beloved father, who has fallen victim to the ravages of Alzheimer's disease.

Vividly written in exciting, you-are-there replay, Always by My Side gives readers an insider's look into an unprecedented sixty-three-day stretch from February to April of 2007 when Jim Nantz became the first broadcaster to call the Super Bowl, the Final Four, and the Masters. Because Nantz was unable to share the voyage with his dad, however, this remarkable journey through America's premier sporting events took on a bittersweet tinge. Nonetheless, the devoted son felt his father's presence every step of the way, and used this championship odyssey to celebrate the people, venues, and moments that tapped into all the goodness that his dad--and his dad's generation-- represent.

In recounting the highlights of more than two thrilling decades with CBS Sports, this broadcasting hall of famer recalls the legends of the industry--Dick Enberg, Curt Gowdy, Jim McKay, Chris Schenkel, Pat Summerall, Jack Whitaker, and others--who sparked his imagination and shaped his style.

Always by My Side traces Nantz's career, from creating his own imaginary studio as a boy to his college days rooming with future PGA Tour golfers Fred Couples and Blaine McCallister to his successful network audition at age twenty-six. Along the way, readers are treated to an array of memories, including Nantz's special relationship with the former president George H. W. Bush, as well as his friendships with such sports royalty as Arnold Palmer, Jack Nicklaus, Tiger Woods, Phil Mickelson, Peyton Manning, Tony Dungy, Tom Brady, Bill Belichick, Mike Krzyzewski, John Wooden, and many others. Poignant stories that explore the theme of fathers and sons who have bonded through a common love of sports complete this sparkling narrative.

Always by My Side promises to be the most cherished Father's Day gift of the year.