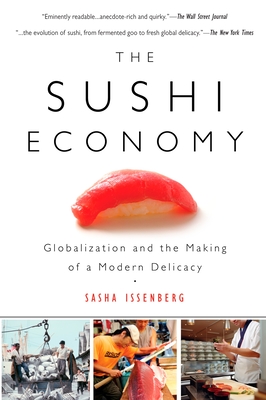 Globalization and the Making of a Modern Delicacy

One generation ago, sushi’s narrow reach ensured that sports fishermen who caught tuna in most of parts of the world sold the meat for pennies as cat food. Today, the fatty cuts of tuna known as toro are among the planet’s most coveted luxury foods, worth hundreds of dollars a pound and capable of losing value more quickly than any other product on earth. So how did one of the world’s most popular foods go from being practically unknown in the United States to being served in towns all across America, and in such a short span of time?

A riveting combination of culinary biography, behind-the- scenes restaurant detail, and a unique exploration of globalization’s dynamics, the book traces sushi’s journey from Japanese street snack to global delicacy. After traversing the pages of The Sushi Economy, you’ll never see the food on your plate—or the world around you—quite the same way again.

Sasha Issenberg was a columnist for Slate and the Washington correspondent for Monocle. He covered the 2008 election as a national political correspondent for The Boston Globe, and his work has also appeared in New York magazine, The Atlantic, and The New York Times Magazine. His first book, The Sushi Economy, was published in 2007. In 2016, Issenberg co-founded Votecastr, which tracked the 2016 election in real time.
Loading...
or support indie stores by buying on