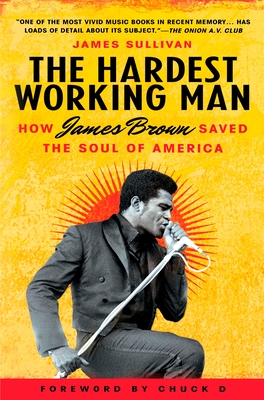 How James Brown Saved the Soul of America

Since James Brown's death in December 2006, the Godfather of Soul has received many stirring tributes. Yet few have addressed his contribution in the darkest hour of the Civil Rights movement. Telling for the first time the story of his historic Boston Garden concert the day after Martin Luther King, Jr.'s assassination, The Hardest Working Man captures the magnificent achievements that made Brown an icon of American popular culture.

Sullivan details the charged atmosphere in Boston, Brown's fight against city officials to take the stage, and the electric performance he delivered. Through the prism of this one concert, Sullivan also charts Brown's incredible rise from poverty to self-made millionaire, his enormous influence on popular music, and his complex relationship with the Civil Rights movement, making The Hardest Working Man both a tribute to an unforgettable concert and a rousing biography of a revolutionary musician.

JAMES SULLIVAN was a pop culture critic at the San Francisco Chronicle for seven years, and has also written for The Boston Globe, Rolling Stone, Entertainment Weekly, and Book.
or
Not Currently Available for Direct Purchase
Copyright © 2020 American Booksellers Association