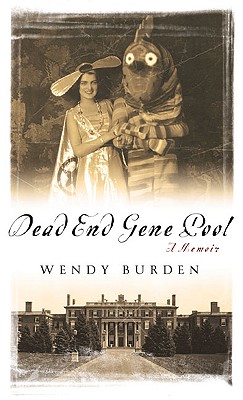 “Burden's memoir of her branch of the family descended from Cornelius Vanderbilt is a delightful cautionary tale of the super rich who inherit a large fortune. The family's unraveling, erratic behavior and eccentricities make up a morbidly fascinating story.”
— Avery Dickey, Inkwood Books, Tampa, FL
View the List

“Burden's memoir of her branch of the family descended from Cornelius Vanderbilt is a delightful cautionary tale of the super rich who inherit a large fortune. The family's unraveling, erratic behavior, and eccentricities make up a morbidly fascinating story.”
— Avery Dickey, Inkwood Books, Tampa, FL
View the List

In the tradition of Sean Wilsey's "Oh The Glory of It All" and Augusten Burrough's "Running With Scissors," the great-great-great granddaughter of Cornelius Vanderbilt gives readers a grand tour of the world of wealth and WASPish peculiarity, in her irreverent and darkly humorous memoir.
For generations the Burdens were one of the wealthiest families in New York, thanks to the inherited fortune of Cornelius "The Commodore" Vanderbilt. By 1955, the year of Wendy's birth, the Burden's had become a clan of overfunded, quirky and brainy, steadfastly chauvinistic, and ultimately doomed bluebloods on the verge of financial and moral decline-and were rarely seen not holding a drink. In "Dead End Gene Pool," Wendy invites readers to meet her tragically flawed family, including an uncle with a fondness for Hitler, a grandfather who believes you can never have enough household staff, and a remarkably flatulent grandmother.
At the heart of the story is Wendy's glamorous and aloof mother who, after her husband's suicide, travels the world in search of the perfect sea and ski tan, leaving her three children in the care of a chain- smoking Scottish nanny, Fifth Avenue grandparents, and an assorted cast of long-suffering household servants (who Wendy and her brothers love to terrorize). Rife with humor, heartbreak, family intrigue, and booze, "Dead End Gene Pool" offers a glimpse into the fascinating world of old money and gives truth to an old maxim: The rich are different.

"In this dark and humorous memoir Wendy Burden takes us inside the family circus that was her side of the Vanderbilt dynasty, bringing American class structure, sibling rivalry and the decline of the bluebloods vividly to life. It is a wonderful read."
-Gus Van Sant

Wendy Burden is a confirmed New Yorker who, to her constant surprise, lives in Portland, Oregon. She is the great-great-great-great granddaughter of Cornelius Vanderbilt, which qualifies her to comment freely on the downward spiral of blue blood families. She has worked as an illustrator, a zookeeper, and a taxidermist; and as an art director for a pornographic magazine from which she was fired for being too tasteful. She was also the owner and chef of a small French restaurant, Chez Wendy. She has yet to attend mortuary school, but is planning on it.