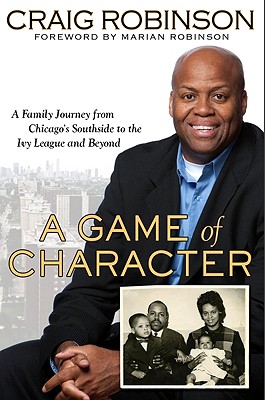 A Game of Character (Hardcover)

The eagerly anticipated inspirational memoir from Michelle Obama's brother, celebrating the extraordinary family members and mentors who have shaped his life
When he stepped into history's spotlight at the National Democratic Convention, Craig Robinson recalls that nothing could have been more gratifying than introducing his sister, Michelle Obama, to millions of Americans. Within minutes, he won the hearts of the nation by sharing highlights of growing up in the modest Robinson household, where the two were raised by devoted parents who taught them the values of education, hard work, and the importance of reaching far beyond what even seemed possible.
Those lessons of character were fundamentals in shaping Craig Robinson's own remarkable journey: from his days playing street basketball on Chicago's Southside, while excelling academically, to admission at Princeton University, where he was later named Ivy League Player of the Year, twice. After playing professionally in Europe, Robinson made an about-face, entering the competitive field of finance. With his MBA from the University of Chicago, his meteoric rise landed him a partnership in a promising new venture. But another dream beckoned and Craig made the unusual decision to forego the trappings of money and status in the business world in order to become a basketball coach. He soon helped transform three struggling teams - as an assistant coach at Northwestern, then as head coach at Brown and now at Oregon State University. In his first season at OSU, he navigated what was declared to be one of the nation's best single season turnarounds.
In "A Game of Character," Robinson takes readers behind the scenes to meet his most important influences in his understanding of the winning traits that are part of his playbook for success. Central to his story are his parents, Marian and Fraser, two indefatigable individuals who showed their children how to believe in themselves and live their lives with conviction through love, discipline and respect. With insights into this exemplary family, we relive memories of how Marian sacrificed a career to be a full-time mom, how Fraser got up and went to work every day while confronting the challenges of multiple sclerosis, how Craig and Michelle strengthened their bond as they journeyed out of the Southside to Princeton University and eventually, the national stage.
Heartwarming, inspiring, and even transformational, "A Game of Character" comes just at the right time in an era of change, reminding readers of our opportunity to work together and embrace the character of our nation, to make a difference in the lives of others and to pave the way for the next generation.
Watch a Video

Craig Robinson grew up on the Southside of Chicago with his younger sister, Michelle, and his parents, Marian and Fraser Robinson. He played college basketball for Princeton under the legendary Pete Carril, where he was a two-time Ivy League Player of the Year. After playing professionally in Europe, Craig made an about-face, entering the competitive field of finance. With his MBA from the University of Chicago, his meteoric rise landed him a partnership in a promising new venture. But another dream beckoned, and Craig left the financial world to become a basketball coach. Prior to joining Oregon State, Craig spent two years as the head coach at Brown, leading a revival of the Bears program. He won more games in his first two years than any other head coach in Brown s basketball history and was named Ivy League Men s Basketball Coach of the Year by Basketball-U.com. Before Brown, Craig spent six seasons with the Northwestern Wildcats under head coach Bill Carmody, where he developed and implemented his local, national, and international recruiting technology. Craig Robinson currently lives in Oregon with his wife, Kelly, and his children."

Praise For A Game of Character: A Family Journey from Chicago's Southside to the Ivy League and Beyond…

"He helped elect a president."
-The New York Times

"Craig's understanding of character and his sound judgment for how to win on any court, clearly learned in the extraordinary household where he grew up, are unsurpassed. The lessons he shares in this book provide a playbook for success that can be applied by anyone. It's been a joy to witness his remarkable journey."
-Bill Carmody, Men's Basketball Coach, Northwestern University

"For many years the role of family historian - the "keeper of the family lore" as Craig puts it - had belonged to his father, my late husband, Fraser Robinson. Without Fraser here to keep those stories alive, they were in danger of becoming lost and Craig was determined not to let them go, but instead to take up his father's mantle of storyteller, motivator, and Philosopher-in-Chief.

Craig has risen to the challenge with A Game of Character, a book that not only pays tribute to his parents (and to all parents, teachers, mentors, and coaches for that matter) but also honors a beautiful brother-sister relationship and all sibling, family, and community relationships."
-Marian Robinson