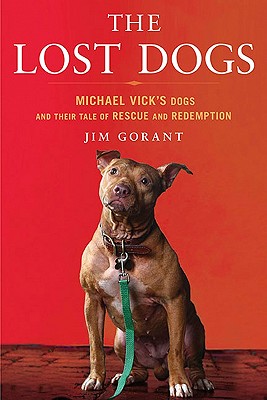 Michael Vick's Dogs and Their Tale of Rescue and Redemption

“NFL quarterback Michael Vick and his minions set up a major dog-fighting operation, and the details of what the dogs had to endure are all here. It's not a cozy read, but it is gripping and emotionally intense, and the drama is real. Gorant shares not only the story of the dogfights, but also the story of the people who discovered and rescued these animals. Reading about those who risked so much to help animals that much of society shuns was enthralling and inspiring. I loved this book!”
— Jennifer Sorensen, Literary Life Bookstore & More, Inc., Grand Rapids, MI
View the List

An inspiring story of survival and our powerful bond with man's best friend, in the aftermath of the nation's most notorious case of animal cruelty.
Animal lovers and sports fans were shocked when the story broke about NFL player Michael Vick's brutal dog fighting operation. But what became of the dozens of dogs who survived? As acclaimed writer Jim Gorant discovered, their story is the truly newsworthy aspect of this case. Expanding on Gorant's "Sports Illustrated" cover story, "The Lost Dogs" traces the effort to bring Vick to justice and turns the spotlight on these infamous pit bulls, which were saved from euthanasia by an outpouring of public appeals coupled with a court order that Vick pay nearly a million dollars in "restitution" to the dogs.
As an ASPCA-led team evaluated each one, they found a few hardened fighters, but many more lovable, friendly creatures desperate for compassion. In "The Lost Dogs," we meet these amazing animals, a number of which are now living in loving homes, while some even work in therapy programs: Johnny Justice participates in Paws for Tales, which lets kids get comfortable with reading aloud by reading to dogs; Leo spends three hours a week with cancer patients and troubled teens. At the heart of the stories are the rescue workers who transformed the pups from victims of animal cruelty into healing caregivers themselves, unleashing priceless hope.
Includes an 8-page photo insert.
Watch a video.

Praise For The Lost Dogs: Michael Vick's Dogs and Their Tale of Rescue and Redemption…

"The Lost Dogs takes an up close and personal look at society's ultimate underdogs, and the animal lovers who bucked the odds-- and the system--to save them. Gorant has crafted an insightful and uplifting tale about the way that nurture can sometimes triumph over nature, and how the remnants of cruelty can be transformed through the power of hope and love."
-Allen St. John, author of The Billion Dollar Game: Behind the Scenes at the Super Bowl

"Swinging between the sordid actions of Michael Vick and his dog-fighting cohorts and the stories of the animals rescued from their clutches, Jim Gorant provides a powerful narrative that is, at times, heartbreaking, but also illuminating and inspirational. You will come away from The Lost Dogs warmed by the knowledge that it wasn't only Vick who got a second chance."
-George Dohrmann

"[The Lost Dogs] should be read by dog lovers. I was surprised to learn that three-quarter of the dogs could be completely rehabilitated. They were either traumatized and scared or friendly dogs who had spent too much time in a barren kennel."
-Temple Grandin, author Animals in Translation

"Jim Gorant's remarkably even-handed The Lost Dogs is a gripping story of redemption that uncovers the other side of the Michael Vick story. A portrait of dogs as individuals, caught up in events that reveal the best and worst of human nature, The Lost Dogs will validate dog lovers and possibly transform cynics as well."
-Ken Foster, author of The Dogs Who Found Me

"Jim Gorant goes beyond the headlines of Michael Vick and the Bad News Kennels to richly tell the rest of the story: how these amazing dogs, in the wake of such brutality, help bring out the best in the human spirit."
-Tom Verducci, author of The Yankee Years

"Beautifully written and forthright [...] The Lost Dogs should make some news; not just for animal lovers but for anyone pondering the human propensity for violence and goodness."
-Library Journal

Jim Gorant has worked as a magazine editor and writer for twenty years and is currently a senior editor at "Sports Illustrated." He is the author of "Fanatic: Ten Things All Sports Fans Should Do before They Die," and his work has appeared in magazines such as "Men s Journal, GQ," and "Outside.""