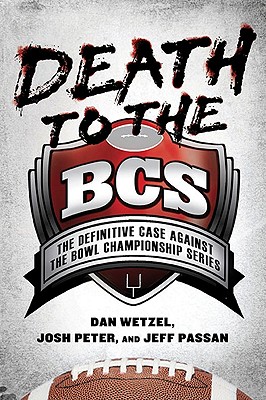 Death to the BCS

The Definitive Case Against the Bowl Championship Series

A team of award-winning sports reporters takes down the Great Satan of college sports: the Bowl Championship Series.
Every college sport picks its champion by a postseason tournament, except for one: Division I-A football. Instead of a tournament, fans are subjected to the Bowl Championship Series, an arcane mix of polling and mathematical rankings that results in just two teams playing for the championship. It is, without a doubt, the most hated institution in all of sports. A recent "Sports Illustrated" poll found that more than 90 percent of sports fans oppose the BCS, yet this system has remained in place for more than a decade. Built upon top-notch investigative reporting, "Death to the BCS" at last reveals the truth about this monstrous entity and offers a simple solution for fixing it.
"Death to the BCS" includes findings from interviews with power players, as well as research into federal tax records, Congressional testimony, and private contracts, revealing:
?The truth behind the "Cartel"-the anonymous suits who run the BCS and who profit handsomely by protecting it
?The flawed math and corruption that determine which teams participate in the national championship
?How the system hurts competition by perpetuating "cupcake" schedules
?How "mid-major" teams are systematically denied a chance to play for the championship
?How a comprehensive sixteen-team playoff plan can solve the problem while enhancing profitability
The first book to lay out the unseemly inner workings of the BCS in full detail, "Death to the BCS" is a rousing manifesto for bringing fairness back to one of our most beloved sports.