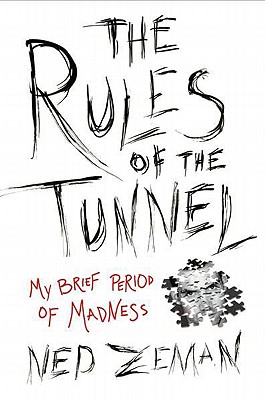 The Rules of the Tunnel

A Brief Period of Madness

A journalist faces his toughest assignment yet: profiling himself. Zeman recounts his struggle with clinical depression in this high- octane, brutally funny memoir about mood disorders, memory, shock treatment therapy and the quest to get back to normal.
Thirty-five million Americans suffer from clinical depression. But Ned Zeman never thought he'd be one of them. He came from a happy Midwestern family. He had great friends and a busy social life. His career was thriving at "Vanity Fair" where he profiled adventurers and eccentrics who pushed the limits and died young.
Then, at age thirty-two, anxiety and depression gripped Zeman with increasing violence and consequences. He experimented with therapist after therapist, medication after medication, hospital after hospital- including McLean Hospital, the facility famed for its treatment of writers, from Sylvia Plath to Susanna Kaysen to David Foster Wallace. Zeman eventually went further, by trying electroconvulsive therapy, aka shock treatment, aka "the treatment of last resort."
By the time it was over, Zeman had lost nearly two years' worth of memory. He was a reporter with amnesia. He had no choice but to start from scratch, to reassemble the pieces of a life he didn't remember and, increasingly, didn't want to. His girlfriend was gone; friends weren't speaking to him. His life lay in ruins. And the biggest question remained, "What the hell did I do?"
By turns hilarious and heartbreaking, profane and hopeful, "The Rules of the Tunnel" is a blistering account of Zeman's twisted ride to hell and back-a return made possible by friends real and less so, among them the dead "eccentrics" he once profiled. It's a guttural shout of a book, one that defies conventional notions about those with mood disorders, unlocks mysteries within mysteries, and proves that sometimes everything you're looking for is right in front of you.

Ned Zeman is a contributing editor at "Vanity Fair "and has written for "Newsweek, Spy, GQ, Outside, "and "Sports Illustrated." Two of his articles were finalists for the National Magazine Award, and he cowrote the screenplay for "Sugarland," a film starring Jodie Foster. He lives in Los Angeles.
Loading...
or
Not Currently Available for Direct Purchase