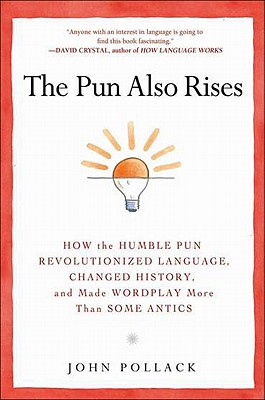 How the Humble Pun Revolutionized Language, Changed History, and Made Wordplay More Than Some Antics

A former word pun champion's funny, erudite, and provocative exploration of puns, the people who make them, and this derided wordplay's remarkable impact on history.

The pun is commonly dismissed as the lowest form of wit, and punsters are often unpopular for their obsessive wordplay. But such attitudes are relatively recent developments. In The Pun Also Rises, John Pollack-a former World Pun Champion and presidential speechwriter for Bill Clinton-explains why such wordplay is significant: It both revolutionized language and played a pivotal role in making the modern world possible. Skillfully weaving together stories and evidence from history, brain science, pop culture, literature, anthropology, and humor, The Pun Also Rises is an authoritative yet playful exploration of a practice that is common, in one form or another, to virtually every language on earth.

At once entertaining and educational, this engaging book answers fundamental questions: Just what is a pun, and why do people make them? How did punning impact the development of human language, and how did that drive creativity and progress? And why, after centuries of decline, does the pun still matter?

Praise For The Pun Also Rises: How the Humble Pun Revolutionized Language, Changed History, and Made Wordplay More Than Some Antics…

"Anyone with an interest in language is going to find this book fascinating."
-David Crystal, author of How Language Works

"With his compelling narrative style, Pollack unearths hard evidence that the noble pun is much more than a literary step-child or linguistic anomaly. And as a practitioner of the art and artifice of wordplay himself, John naturally dedicates a bit of spice to peppering and assaulting us with a few subtle zingers of his zone."
-Gary Hallock, producer of the O.Henry Pun-Off World Championships

"In The Pun Also Rises, John Pollack stirs the brain and tickles the funny bone with rewording insights into why the pun is dramatically rising in our culture, and illuminates with dazzling whiz and witdom how the pun has made us who we are today."
-Richard Lederer, International Punster of the Year and author of Get Thee to a Punnery