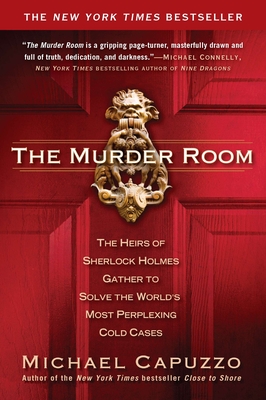 Thrilling, true crime tales from the Vidocq Society - a team of the world's finest forensic investigators whose monthly lunches lead to justice in ice-cold murders.

Three of the greatest detectives in the world were heartsick over the growing tide of unsolved murders. Good friends and sometime rivals William Fleisher, Frank Bender, and Richard Walter decided one day over lunch that something had to be done, and pledged themselves to a grand quest for justice.

The Murder Room draws the reader into a chilling, darkly humorous, awe-inspiring world as the three partners travel far from their Victorian dining room to hunt ruthless killers, among them the grisly murderer of a millionaire's son, a serial killer who carves off faces, and a child killer enjoying fifty years of freedom and dark fantasy.

Acclaimed bestselling author Michael Capuzzo brings true crime realistically and vividly to life in this account of a group of passionate men and women, inspired by their own wounded hearts to make a stand for truth, goodness, and justice in a world gone mad.

Born in Boston and educated at Northwestern University, Michael Capuzzo is the author of the acclaimed New York Times Bestseller Close to Shore, a historical thriller of the true story that inspired the novel and movie Jaws. Winner of many writing prizes as a staff reporter for The Philadelphia Inquirer and The Miami Herald, and for stories in magazines including Sports Illustrated, Esquire and Life, he lives in Pennsylvania, where he and his wife publish a prize-winning storytelling magazine, Mountain Home.
or
Buy Here
Copyright © 2020 American Booksellers Association