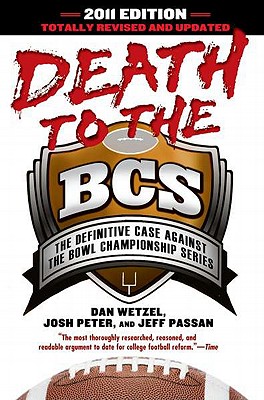 Death to the BCS

The Definitive Case Against the Bowl Championship Series

With all-new reporting, a completely revised and updated second edition of the bestseller that takes down the Great Satan of college sports: the Bowl Championship Series (BCS).

Every college sport picks its champion by a postseason tournament, except for one: Divsiion I-A football. Instead of a tournament, fans are subjected to the Bowl Championship Series, an arcane mix of polling and mathematical rankings that results in just two teams playing for the championship. It is, without a doubt, the most hated institution in all of sports. A recent "Sports Illustrated" poll found that more than 90% of sports fans oppose the BCS, yet this system has remained in place for more than a decade.

Building upon top-notch investigative reporting, Wetzel, Peter, and Passan at last reveal the truth about this monstrous entity and offer a simple solution for fixing it. "Death to the BCS: Totally Revised and Updated" is brought up to date to cover the 2010-2011 season, listing which teams were screwed by the BCS (such as TCU), how much money college football left on the table by not having a playoff (based on 2011 tax filings), and how the calls for the abolition of the BCS grew even louder this past year. The book also includes findings from interviews with power players, as well as research into federal tax records, congressional testimony, and private contracts. The first book to lay out the unseemly inner workings of the BCS in full detail, "Death to the BCS" is a rousing manifesto for bringing fairness back to one of our most beloved sports.


Praise For Death to the BCS: The Definitive Case Against the Bowl Championship Series…

"The most thoroughly researched, reasoned and readable argument to date for college football reform."
--Time

"The plan put forward by Wetzel, Peter and Passan is certainly the strongest BCS-alternative to date. It is imperative that other sports journalists, college administrators and football fans read Death to the BCS."
--Brian Frederick, The Huffington Post

"Alternately brilliant and scary. You will put the book down sweaty, angry and wishing you could do something to change the system."
--Nando DiFino, The Wall Street Journal

"The book accurately and diligently points out what people have known for years: The BCS is fundamentally flawed, at times a joke, and very controversial."
--Chris Dufresne, Los Angeles Times

Dan Wetzel, Josh Peter and Jeff Passan write for Yahoo! Sports, the most read sports site on the Web. Wetzel has coauthored four books, including the "New York Times" bestseller "Resilience: Faith, Focus, Triumph with Alonzo Mourning," and lives in Michigan. Peter is an award-winning, Pulitzer Prize-nominated investigative journalist who has earned national attention for his reporting on the Bowl Championship Series. He lives in Los Angeles. Passan has won multiple Associated Press sports editors' awards and lives in Kansas.
Loading...
or
Not Currently Available for Direct Purchase