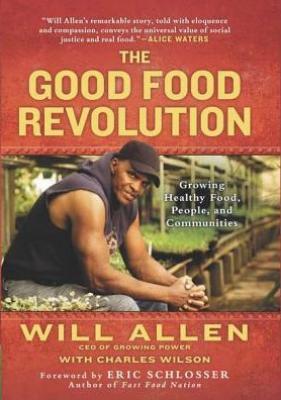 A pioneering urban farmer and MacArthur Genius Award winner points the way to building a new food system that can feed and heal broken communities.
The son of a sharecropper, Will Allen had no intention of ever becoming a farmer himself. But after years in professional basketball and as an executive for Kentucky Fried Chicken and Procter & Gamble, Allen cashed in his retirement fund for a two-acre plot a half mile away from Milwaukee's largest public housing project. The area was a food desert with only convenience stores and fast-food restaurants to serve the needs of local residents.
In the face of financial challenges and daunting odds, Allen built the country's preeminent urban farm a food and educational center that now produces enough vegetables and fish year-round to feed thousands of people. Employing young people from the neighboring housing project and community, Growing Power has sought to prove that local food systems can help troubled youths, dismantle racism, create jobs, bring urban and rural communities closer together, and improve public health. Today, Allen's organization helps develop community food systems across the country.
An eco-classic in the making, "The Good Food Revolution" is the story of Will's personal journey, the lives he has touched, and a grassroots movement that is changing the way our nation eats.

“From the plots of his Milwaukee urban farm to low-income communities across America, Will Allen has shown us a new type of heroism.  Through The Good Food Revolution, Allen recounts his effort to reclaim his family’s heritage and, in doing so, confront lingering disparities in racial and economic justice.  As the champion of a new and promising movement, Allen is skillfully leading Americans to face one of our  greatest domestic issues – our health.” –  Former President Bill Clinton


“Far more than a book about food, The Good Food Revolution captivates your heart and mind with the sheer passion of compelling and righteous innovation. Wow!” –  Joel Salatin, Polyface Farm


“Will Allen is a hero and an inspiration to urban farmers everywhere.  Now, with The Good Food Revolution, we learn  how Allen rediscovered the power of agriculture, and in doing so transformed a city, its community, and eventually the world – with the help of millions of red wiggler worms.  Told with grace and utter honesty, I found myself cheering for Allen and his organization, Growing Power.” – Novella Carpenter, author of Farm City and The Essential Urban Farmer

After retiring from professional basketball and executive positions at Kentucky Fried Chicken and Procter & Gamble, WillAllen became the CEO of Growing Power. He lives in Milwaukee.

Charles Wilson is a journalist and the coauthor with Eric Schlosser of the #1 "New York Times "bestselling children s book "Chew on This: Everything You Don t Want to

Know About Fast Food.""
Loading...
or
Not Currently Available for Direct Purchase