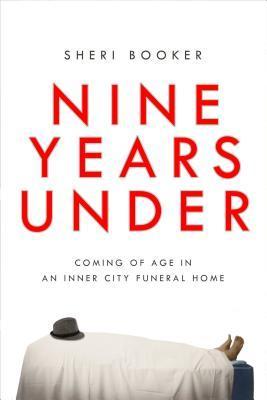 Coming of Age in an Inner-City Funeral Home

Sheri Booker was only fifteen years old when she started working at Wylie Funeral Home in West Baltimore. She had no idea that her summer job would become nine years of immersion in a hidden world. Reeling from the death of her beloved great aunt, she found comfort in the funeral home, and soon has the run of the place, from its sacred chapels to the terrifying embalming room.

With AIDS and gang violence threatening to wipe out a generation of black men, Wylie was never short on business. As families came together to bury one of their own, Booker was privy to their most intimate moments of grief and despair. But along with the sadness, Booker encountered moments of dark humor: brawls between mistresses and widows, and car crashes at McDonald’s with dead bodies in tow. While she never got over her terror of the embalming room, Booker learned to expect the unexpected and to never, ever cry.

This vibrant tour of a macabre world reveals an urban funeral culture where photo-screened memorial T-shirts often replace suits and ties and the dead are sent off with a joint or a fifth of cognac. Nine Years Under offers readers an unbelievable glimpse into an industry in the backdrop of all our lives.

Praise For Nine Years Under: Coming of Age in an Inner-City Funeral Home…

Sheri Booker has a BA in political science from the College of Notre Dame of Maryland and an MFA in creative nonfiction from Goucher College. A writer, poet, spoken word artist, photographer, and teacher, she currently lives in Baltimore.
Loading...
or
Not Currently Available for Direct Purchase