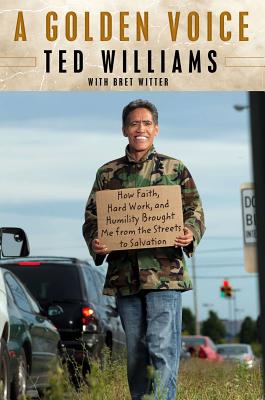 YouTube sensation Ted William's memoir of addiction, homelessness, and unlikely redemption, cowritten by #1 "New York Times" bestselling author Bret Witter
Ted Williams was panhandling in December 2010 when a passerby taped him and posted a clip of his gorgeous radio voice on YouTube. The video went viral, and overnight, launched him the homeless man with a golden voice into the hearts of millions.
Since then, millions have heard pieces of his story: his successful radio career, his crack addiction, his multiple arrests, and his heartbreaking relationship with his ninety-year-old mother. But in "A Golden Voice," Ted Williams finally puts all the pieces together to give an unforgettable, searingly honest account of life on the streets. Nothing is held back, as Williams takes the reader through prostitution, theft, crack houses, and homeless shelters in a search, ultimately, for redemption and hope. Along the way, we see his relationship with his long-term girlfriend, Kathy, grow into an unlikely and inspiring love story, and we hear the Golden Voice of God lead Ted from the selfishness of crime to the humility of the street corner almost a year before he was discovered on that highway entrance ramp.
But this memoir isn t just an exploration of wrongs and a once-in-a-lifetime chance to give homelessness a voice. It is a deeply American, from-the-heart comeback story about the power of hope, faith, and personal responsibility. With the innate charisma that has won him millions of fans, Ted Williams proves that no one, no matter how degraded, is too lost for a second chance.

Ted Williams grew up in Bedford-Stuyvesant, Brooklyn, and served in the army before becoming the #1 drive-time DJ in Columbus, Ohio. Addicted to crack, he eventually lost his job and spent seventeen years homeless on the streets of Columbus. He left long-term rehab in the fall of 2011 and currently lives in a Columbus suburb.

Bret Witter is a five-time "New York Times" bestselling author with more than two million books in print, including #1 "New York Times" bestseller "Dewey: The Small-Town Library Cat Who Touched the World." He lives with his wife and two children in Louisville, Kentucky.
or
Not Currently Available for Direct Purchase
Copyright © 2020 American Booksellers Association