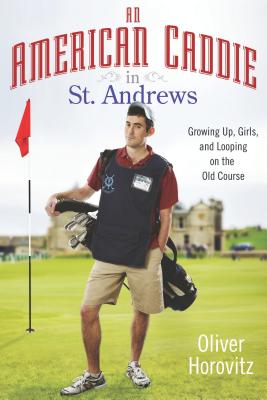 Growing Up, Girls, and Looping on the Old Course

A hilarious and poignant memoir of a Harvard student who comes of age as a caddie on St. Andrews's fabled Old Course.
In the middle of Oliver Horovitz's high school graduation ceremony, his cell phone rang: It was Harvard. He d been accepted, but he couldn t start for another year.
A caddie since he was twelve and a golfer sporting a 1.8 handicap, Ollie decides to spend his gap year in St. Andrews, Scotland a town with the U.K.'s highest number of pubs per capita, and home to the Old Course, golf's most famous eighteen holes where he enrolls in the St. Andrews Links Trust caddie trainee program. Initially, the notoriously brusque veteran caddies treat Ollie like a bug. But after a year of waking up at 4:30 A.M. every morning and looping two rounds a day, Ollie earns their grudging respect only to have to pack up and leave for Harvard.
There, Ollie's new classmates are the sons of Albania's UN ambassador, the owner of Heineken, and the CEO of Goldman Sachs. Surrounded by sixth generation legacies, he feels like a fish out of water all over again and can t wait to get back to St. Andrews. Even after graduation, when his college friends rush to Wall Street, Horovitz continues to return each summer to caddie on the Old Course.
A hilarious, irresistible, behind-the-scenes peek at the world's most celebrated golf course and its equally famous caddie shack "An American Caddie in St. Andrews"is certain to not only entertain golfers and fans of St. Andrews but also anyone who dares to remember stumbling into adulthood and finding one's place in the world.

Oliver Horovitz is a writer, filmmaker, and caddie on the Old Course in St. Andrews, Scotland. He has written about his caddying experiences for "Sports Illustrated," "Golf World," "Golf Digest," and "New England Golfer." In 2007, he wrote, directed, and produced a documentary called "The Caddies of St. Andrews." He divides his time between New York City and St. Andrews, Scotland."

Praise For An American Caddie in St. Andrews: Growing Up, Girls, and Looping on the Old Course…

"This poignant, funny memoir by Oliver Horovitz, a Harvard student who finds his calling on the Scottish links, is an intriguing tour of life at the world's most celebrated course."
—Parade

“With the energy and joy of youth, he describes his ‘gap year’…His interaction with the group of ‘pretty’ university girls, deemed ‘Model Caddies,’ is wondrous…Horovitz shares his deeply felt memories of golf, girls, and the academy boldly, never taking himself too seriously or being irreverent about the caddie tradition on the time-honored Old Course links.”
—Publishers Weekly

“In this breezy memoir, the younger brother of a Beastie Boy spills insider tales about looping and living in St. Andrews…the characters—bitter old caddies, the author’s university pals and his 83–year–old uncle—are lovable. So, too, are Horovitz's yarns, which feature late–night antics in the Old Toon and a round caddying for Seinfeld creator Larry David.”
—Golf Magazine

"Anyone looking for a good read should look no further than An American Caddie in St. Andrews."
—GolfBiz.net

"An utterly absorbing, affectionate, and funny narrative of his halcyon days in St. Andrews.  I loved his memoir so much I lingered over it, relishing my own memories of that mysteriously captivating town, historic links, and addictive Scottish game, and I recommend Ollie's book to those who've either already walked in the footsteps of Old Tom Morris or have a visit to the home of golf on their bucket list."
—Ron Hansen, author of The Assassination of Jesse James by the Coward Robert Ford

"Oliver Horovitz is a writer to watch. Even if you don't play golf you will enjoy the Ring Lardner style of Ollie's An American Caddie in St. Andrews. The book has great characters and a wonderful sense of being a fish out of water.
—Michael Douglas

“This is a story you have to read before your next bogey. Oliver has his priorities spot on!”
—Gary McCord

"An American Caddie in St. Andrews is a funny, charming, coming-of age tale about golf and life ... Horovitz is a gifted writer, and an engaging storyteller ... and he can read putts!"
—Huey Lewis

"While exposing the insular world of the St. Andrews caddie, Oliver Horovitz discovers a good deal of truth about golf, golfers, and himself. A terrific read. Recommended."
—Curt Sampson, author of The War By the Shore