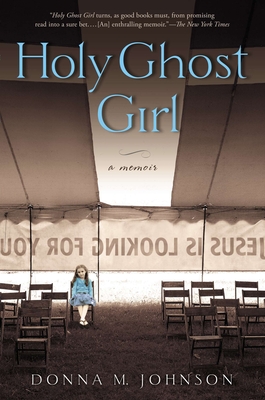 “Johnson's treatment of her childhood immersed in the Pentecostal tent-meeting movement is flawless. She is truthful about her memories, but she does not rush to the judgment of others. Weak of flesh but strong in willpower, well-meaning Randall Terrell is the leader of a traveling group of the faithful. Tent meetings are huge, and once the donations become enough to cover bills, they soon lead to an excess that is all too familiar. This is an excellent book for those wanting to both know more about this particular spiritual movement and gain some understanding of the faith that kept the followers going.”
— Linda Bond, Auntie's Bookstore, Spokane, WA
View the List

A compassionate, humorous memoir of faith, betrayal, and coming of age on the evangelical sawdust trail.

Long before the Blues Brothers coined the term, Donna M. Johnson’s family was on a mission from God. She was just three years old when her mother signed on as the organist for tent revivalist David Terrell. Before long, Donna and her family were part of the hugely popular evangelical preacher’s inner circle. At seventeen, she left the ministry for good, with a trove of stranger-than-fiction memories. A homecoming like no other, Holy Ghost Girl brings to life miracles, exorcisms, and face-offs with the Ku Klux Klan. And that’s just what went on under the tent.

As Terrell became known worldwide during the 1960s and ’70s, he enthralled—and healed—thousands a night, andthe caravan of broken-down cars and trucks that made up his ministry evolved into fleets of Mercedes and private jets. The glories of the Word mixed with betrayals of the flesh, and Donna’s mother bore Terrell’s children in one of the secret households he maintained. Terrell’s followers, dubbed “Terrellites” by the press, descended on backwaters across the South to await the apocalypse in cult-like communities.

Johnson’s personal story takes us into the heart of a mystical and deeply flawed family where the norms are anything but normal and where love covers a multitude of sin. Recounted with the deadpan observations and surreal detail only a kid would notice, Holy Ghost Girl bypasses easy judgment to articulate a rich world in which the mystery of faith and human frailty share a surprising and humorous coexistence.

Donna M. Johnson has written about religion for The Dallas Morning News and other publications. Holy Ghost Girl won the Mayborn Creative Nonfiction prize as a work in progress. Donna lives in Austin, Texas, with her husband, the poet and author Kirk Wilson.

“What a life! Holy Ghost Girl takes you inside a world where God and sin and miracles and deceit and love are so jumbled together you can’t tell them apart. Donna Johnson sorts through her story with great insight, compassion and humor, giving us an indelible portrait of a charismatic preacher and the faithful who so desperately believed in him.”  — Jeannette Walls, author of New York Times bestsellers The Glass Castle and Half Broke Horses

“Holy Ghost Girl turns, as good books must, from promising read into sure bet. Ms. Johnson’s enthralling memoir, her first book, is about growing up on the road in a clan of what she calls Holy Rollers.” — The New York Times

“Therein lies the paradox at the center of Johnson’s story, in which faith and love live alongside anger and betrayal” — O, The Oprah Magazine

“‘Holy Ghost Girl’ is the most compelling, exquisitely detailed, well-written memoir I have read in a month of Sundays.” — Tampa Tribune

"A wretching and extraordinarily beautiful memoir. If you're a fan of The Glass Castle, you'll be mesmerized by Donna M. Johnson's true-life tale of how her young life was upended by her mother's love affair with an infamous charismatic preacher." — Lisa Napoli, author of Radio Shangri-La
or support indie stores by buying on
Copyright © 2020 American Booksellers Association