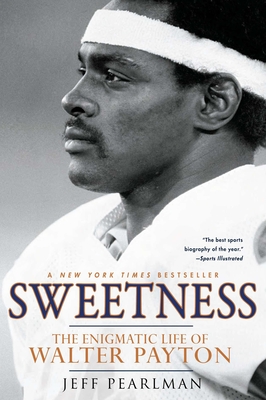 The Enigmatic Life of Walter Payton

In the twelve years since his death from cancer, Walter Payton’s legend has only grown in magnitude. The Hall of Fame running back, who broke Jim Brown’s all-time NFL rushing mark, appeared in nine Pro Bowls, won a Super Bowl ring with the 1985 Chicago Bears, and is still revered throughout the sporting landscape. Payton has become the lasting image of what’s great about football. Yet in mindlessly canonizing the man simply known as “Sweetness,” we have missed the opportunity to understand—and appreciate—one of the most uniquely complex and enigmatic superstars in the history of American sports.

No longer. Based on meticulous research and interviews with nearly seven hundred family members, friends, teammates, and various associates, Sweetness delivers an unforgettable portrait of a man who lived his life just like he played the game: at full speed. From his childhood in segregated Mississippi, to Chicago, where Payton emerged from athlete to icon as he broke the NFL’s all-time rushing record and led the Bears to Super Bowl glory; to his darker moments battling depression and adjusting to life after football, Sweetness is an eloquently written, revelatory saga of a complex, guarded superstar who died far too young.


Praise For Sweetness: The Enigmatic Life of Walter Payton…

"Mr. Halberstam would have been the first to insist that we not confuse fiction with nonfiction, and that we not mistake biography -- the telling of a life -- for hagiography -- the burnishing of a legend. Which was football's big trouble last week, it turns out, as lots of folks who should know better took exception to a new biography of Walter Payton."
—ESPN.com, "The Sporting Life"

"I found the Walter of your book to be more of a hero than the one people refer to."
—Rick Hogan, WGN Sunday Papers

"Over the weekend I read an advance copy of Sweetness and found it to be an incredible, thoughtful, deep and profound read. It’s exceptional work.  I wouldn’t let an out-of-context excerpt and some enraged condemnations get in the way of a fascinating read about a fascinating man."
—Dan Wetzel, Yahoo! Sports

"READ THE BOOK...But if you like texture, if you want to get the sense of a real life lived by a real person with real beauty within and real warts, start reading and do so with an open mind."
—The Indianapolis Star

"Pearlman did not set out to expose Payton but to understand him, to identify and define the qualities that made him so appealing. He was a football-playing hero to millions, true, but he was also a human being of considerable complexity. There’s a story in how those two sides intersected, and a skilled biographer gets to that story ... If Walter Payton, magnificent football player and Chicago treasure, is enough for you, ignore the book and cherish your memories. If Walter Payton, flawed but fascinating human being, intrigues you, read it. You might come away with a greater appreciation."
—The New York Times

If Walter Payton, magnificent football player and Chicago treasure, is enough for you, ignore the book and cherish your memories. If Walter Payton, flawed but fascinating human being, intrigues you, read it. You might come away with a greater appreciation

Jeff Pearlman is the author of four previous books, including two New York Times bestsellers, The Bad Guys Won! and Boys Will Be Boys. He is a columnist for SI.com as well as a contributor to The Wall Street Journal. He blogs regularly at jeffpearlman.com. Pearlman and his family live in New York.
Loading...
or
Not Currently Available for Direct Purchase