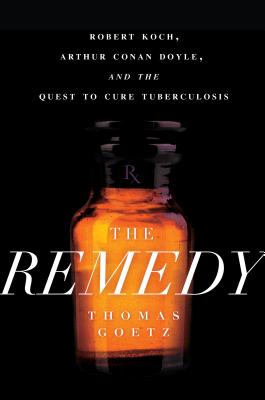 The riveting history of tuberculosis, the world's most lethal disease, the two men whose lives it tragically intertwined, and the birth of medical science.
In 1875, tuberculosis was the deadliest disease in the world, accountable for a third of all deaths. A diagnosis of TB often called consumption was a death sentence. Then, in a triumph of medical science, a German doctor named Robert Koch deployed an unprecedented scientific rigor to discover the bacteria that caused TB. Koch soon embarked on a remedy a remedy that would be his undoing.
When Koch announced his cure for consumption, Arthur Conan Doyle, then a small-town doctor in England and sometime writer, went to Berlin to cover the event. Touring the ward of reportedly cured patients, he was horrified. Koch's remedy was either sloppy science or outright fraud.
But to a world desperate for relief, Koch's remedy wasn t so easily dismissed. As Europe's consumptives descended upon Berlin, Koch urgently tried to prove his case. Conan Doyle, meanwhile, returned to England determined to abandon medicine in favor of writing. In particular, he turned to a character inspired by the very scientific methods that Koch had formulated: Sherlock Holmes.
Capturing the moment when mystery and magic began to yield to science, "The Remedy" chronicles the stunning story of how the germ theory of disease became a true fact, how two men of ambition were emboldened to reach for something more, and how scientific discoveries evolve into social truths.

Thomas Goetz is a noted science journalist and healthcare innovator. The entrepreneur-in-residence at the Robert Wood Johnson Foundation, he is also co-founder of the health technology company, Iodine. The former executive editor of "WIRED, "his writing has been selected repeatedly for the "Best American Science Writing"and "Best American Technology Writing "anthologies. He holds a master of public health degree from the University of California Berkeley and a masters in literature from the University of Virginia. He lives in San Francisco."

Praise For The Remedy: Robert Koch, Arthur Conan Doyle, and the Quest to Cure Tuberculosis…

“A thoughtful, patient, ultimately fascinating account of the struggle of 19th century science, and society, to come to grips with the germ theory of illness, and develop new technologies to take on one of humanity’s oldest scourges, tuberculosis.”
-- Forbes

"Immensely pleasurable... a superb narrative...  [Goetz is] a fluid and elegant writer, with a knack for painting the personalities of those involved."
– The Lancet

“Weaves the suspense of a Sherlock Holmes mystery into a tale of ambition, obsession, scientific discovery and skepticism at the dawn of modern medicine.”
– Discover Magazine

“A thoroughly enjoyable and illuminating journey through several decades of European history and an intimate portrait of two once-obscure doctors who shaped it. It's a book that illustrates how the imagination and the intellect can work in concert to cure a disease, or to delight an audience of millions.”
–  Los Angeles Times

“The Remedy is a highly entertaining, interesting, and thought-provoking book, leaving the reader with a much deeper appreciation of how much safer — and in many ways, predictable — our lives are today thanks to the toil and efforts of men such as Robert Koch and his contemporaries."
—Boston Globe

“Goetz weaves together a compelling narrative, chronicling the struggle to find the causes and cures for some of the most ferocious diseases that have stalked humans (and animals) through time: cholera, smallpox, anthrax and tuberculosis... Perhaps most importantly, The Remedy reminds us of how far we have come, and how much we take for granted in modern medicine.”
— Bookpage

"An intriguing medical and literary history… fascinating, convergent stories [of] doggedly inquisitive men who discovered that neither germs nor crime are any match for science."
—Publishers Weekly

“A beguiling real-life medical detective story.” —Kirkus Reviews   "The Remedy is a rare, thrilling achievement: a book that helps us understand the roots of transformative ideas that simultaneously manages to tell a story worthy of a 19th-century novel, full of surprising links, rivalries, and intellectual triumph."
—Steven Johnson, author of The Ghost Map

"In The Remedy, Thomas Goetz offers a wonderfully original origins story for modern science. He weaves together one of the great achievements of the nineteenth century--the germ theory of disease--with the creation of the fictional superhero of science, Sherlock Homes, with grace and surprise."
—Carl Zimmer, author of A Planet of Viruses and The Tangled Bank: An Introduction to Evolution

Q&A with Thomas Goetz, author of The Remedy

What is the Germ Theory, and why was it so important?
The Germ Theory is the hypothesis that many diseases are caused by microbes, not by the body itself or by some other cause such as miasma - bad air. The idea that some diseases were pathogenic or contagious had been around for centuries, but it wasn’t until Louis Pasteur in the 1860s and then Robert Koch in the 1870s that enough evidence was marshaled to make the argument convincing. In particular, it was Koch, with his Postulates - a series of conditions that must be met to prove a microbial cause of disease - who produced a method by which science could definitively establish the cause of disease.

Pasteur and Koch’s work on the Germ Theory constitutes the birth of modern medicine, when science finally began to explore the true causes of disease - and therefore to determine vaccines or treatments for those diseases. Once the germ theory was established in laboratories, at last hygienists and social reformers could finally attack the causes of infectious disease, which were by far the leading cause of death in the 19th and early 20th centuries. This insight into causes pushed hygiene forward. Within a few decades, infectious disease was no longer the looming threat it had been, and people’s lives grew longer and healthier.

Why does it take society so long to believe science?
Any scientific discovery takes about a generation to manifest - to work its way from discovery to publication into practice. That was true in the 1870s and it’s true in the 2010s. This lag is vexing, especially for scientists, but it’s understandable. It simply takes time for consensus to emerge, and for an academic consensus to actually change practice - how science is applied in the field. The fact that society often needs to be convinced of the new truth only adds to the lag. This sounds old fashioned - the germ theory is entirely common sense now, and it seems absurd to think that anyone would doubt the existence of germs. But we have the same slow process today. Think about something seemingly obvious, like vitamins. The 1980s saw a new wave of research into Vitamin D deficiency and various disease risks - but we are still muddling towards some sort of consensus on what people should actually do 30 years later. Same with the science around sugar and nutrition and obesity. It takes science a long time to establish a proof, and it takes society a long time to believe that proof.

Why should we care about infectious disease today?
There are some scientists would believe we’re on the precipice of a new era of infectious disease, due to a few convergent trends. One is the fact that we’re exhausting our antibiotics and new superbugs are emerging. Second is the idea that many diseases we have considered chronic - such as heart disease or obesity or auto-immune disorders - may actually have significant microbial components. I think one thing to understand is that our understanding of all microbes as ‘germs’ may be misplaced. There are many microbes that actually help us more than hurt us - and we need to be aware that purging all germs from our environment can have profoundly negative unintended consequences.

What does Sherlock Holmes have to do with tuberculosis?
Sherlock Holmes is a character of his age - he personifies the late 19th century’s appetite for all things scientific and for this new notion that science can actually solve human problems. In creating Sherlock Holmes, Arthur Conan Doyle borrowed not only from his med school mentor Joe Bell, but also from the great scientists of the day, particularly Robert Koch’s, who diligent laboratory methods Conan Doyle admired and wrote about. When Koch discovered the bacteria that causes tuberculosis, Conan Doyle was inspired by the rigor and tenacity of Koch’s methods, and his single-minded focus on rooting out the cause. The fact that Conan Doyle’s own wife would die of the disease decades later - and the fact that tuberculosis was part of the ruse at Reichenbach Falls that allowed Holmes to be “killed” - well, that’s the consequence of tuberculosis being such a ubiquitous disease, common to everyday experience at the time.

Why did the last quarter of the 19th century create more technologies that the last quarter of the 20th century?
Those 25 years from 1875 to 1900 were abuzz with discovery, with invention after invention transforming everyday life. Everything from toilet paper to paperclips to electronics were invented in those years. In part, this was a result of the previous decades of industrialization, where factory processes were at last turned toward addressing the toils of daily life. A century later, by 1975, so much of modern life had already been optimized and improved upon. That’s not to say there weren’t transformative discoveries afoot - the personal computer, the cell phone, and so many other pieces of modern technology emerged in those last 25 years, technologies that we’d consider essential today. But I’d argue that the pace and impact of new technologies was much more profound in the 19th century. For many, the landscape of daily life on either end of those 25 years would be unrecognizable, where life in 2000 wasn’t all that different from 1975. Even bell bottoms were making a comeback!