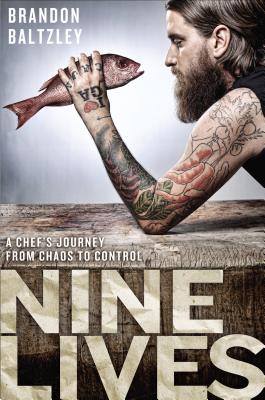 A rising young chef lays bare his gripping story of culinary triumphs, consuming drug addictions, and his continuing quest to stay on top while staying sober
At twenty-six years old, Brandon Baltzley was poised for his star turn as the opening chef at Chicago's hotspot Tribute. People called him a prodigy the Salvador Dali of cooking and foodie blogs followed his every move. Instead, Brandon walked away from it all and entered rehab to deal with the alcohol and cocaine addiction that had enslaved him most of his adult life.
Brandon grew up in the South with no father and an addict mother. At nine, he was prepping vegetables in the back of a gay bar. From there, he went on to deep-frying with Paula Deen to cooking in an array of Michelin-starred restaurants, including Grant Achatz's world-renowned Alinea. In between, he was touring the country with his heavy metal band, Kylesa and doing his first stint in rehab.
Like Gabrielle Hamilton's "Blood, Butter and Bones," Brandon's "Nine Lives" is about blazing a way out from a rough childhood through talent and an unbridled passion for the craft of cooking. A story that's still being written as Brandon works with Crux, the pop-up culinary collective he founded, and plans for the opening of his own restaurant, "Nine Lives "serves up a raw and riveting memoir about food, rock-and-roll, and redemption.


Praise For Nine Lives: A Chef's Journey from Chaos to Control…

“Baltzley has a clear passion for food, which will attract readers drawn to the personalities behind the dishes, but his eye-openingly honest account of drug addiction clearly separates his story from most foodie memoirs… After following Baltzley on his breakneck trip through both high-end and middle-of-the-road restaurants across the country, readers will wonder what this unusual chef’s next life will bring.”
—Booklist

"Nine Lives is a compelling story of perseverance and the power of food. I’m honored to have been a part of Brandon’s journey.”
—Wylie Dufresne, Chef /Owner of wd~50, Alder

“Nine Lives is a cool mix of food and drugs. Baltzley's story is captivating. His voice is raw and honest. Makes you hungry, and repulsed all at the same time--but in the best way possible. The frenetic energy in his life is captured by the bullet train fast narrative. A great work of art."
—Nic Sheff, best-selling author of Tweak and We All Fall Down

"Nine Lives is a compelling story about my industry and the perils of its least endearing ingredient, addiction. It's a crazy journey through the life of Brandon Baltzley, a phenomenally talented, self-taught, but self-destroying, chef. Poignant, heartbreaking, funny and ultimately victorious, it's a story about being happy with yourself, which is sometimes harder than any dish you can cook. Life, like food, is easy to fuck up."
—Hugh Acheson, James Beard Award winning chef and author of A New Turn in the South

"If James Frey and Anthony Bourdain had a love child, Brandon Baltzley would be their delightful and devilish spawn."
—Michael Nagrant, Chicago Sun-Times food critic and contributor to the Alinea cookbook

Brandon Baltzley is a recovering addict, which is not something to be proud of, but something to build on. An eternal nomad, he has spent time in Chicago, Maine, and Pittsburgh.
Loading...
or
Not Currently Available for Direct Purchase