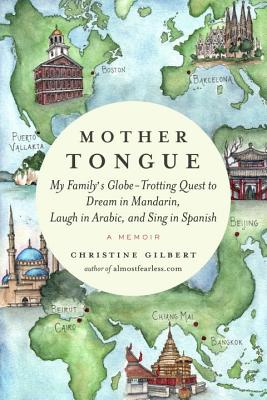 My Family's Globe-Trotting Quest to Dream in Mandarin, Laugh in Arabic, and Sing in Spanish

One woman’s quest to learn Mandarin in Beijing, Arabic in Beirut, and Spanish in Mexico, with her young family along for the ride.

Imagine negotiating for a replacement carburetor in rural Mexico with words you’re secretly pulling from a pocket dictionary. Imagine your two-year-old asking for more niunai at dinner—a Mandarin word for milk that even you don’t know yet. Imagine finding out that you’re unexpectedly pregnant while living in war-torn Beirut. With vivid and evocative language, Christine Gilbert takes us along with her into foreign lands, showing us what it’s like to make a life in an unfamiliar world—and in an unfamiliar tongue.

Gilbert was a young mother when she boldly uprooted her family to move around the world, studying Mandarin in China, Arabic in Lebanon, and Spanish in Mexico, with her toddler son and all-American husband along for the ride.Their story takes us from Beijing to Beirut, from Cyprus to Chiang Mai—and also explores recent breakthroughs in bilingual brain mapping and the controversial debates happening in linguistics right now.

Gilbert’s adventures abroad prove just how much language influences culture (and vice versa), and lead her to results she never expected. Mother Tongue is a fascinating and uplifting story about taking big risks for bigger rewards and trying to find meaning and happiness through tireless pursuit—no matter what hurdles may arise. It’s a treat for language enthusiasts and armchair travelers alike.

Praise For Mother Tongue: My Family's Globe-Trotting Quest to Dream in Mandarin, Laugh in Arabic, and Sing in Spanish…

“An engaging travel narrative for both language lovers and general audiences.”
—Kirkus Reviews

“Christine Gilbert takes us, her husband, and her toddler to China, Beirut, and Mexico on a quest to connect with locals and master their languages… for as long as it takes. But her plans get hijacked by political and human events. Gilbert’s warmth and willpower are contagious, and I especially loved vicariously learning the challenges of Mandarin. Her journey moves us through determination, disappointments, and finally, into joy. Her talent is to make us care!”
—Rita Golden Gelman, author of Tales of a Female Nomad

“Christine Gilbert’s intimate, honest narrative, rooted in science, illustrates the courage it takes to “be global” and raise global kids – complete with humor, humility and humanity. I thoroughly enjoyedMother Tongue and encourage anyone who’s considered living or traveling abroad with kids to read this book!”
—Homa S. Tavangar, author of Growing Up Global

“Read this book while packing your suitcase. You'll be inspired by Christine's stories of adventure in foreign lands, and you'll be encouraged by how close her family became as they traded risk for reward wherever they went.”
—Chris Guillebeau, NYT bestselling author of Born for This and The $100 Startup

"Inspiring...  Gilbert balances a young family and her career to take us on an enviable journey around the world while also providing illuminating research on language acquisition for the young and old alike."
—Jen Lin-Liu, author of On the Noodle Road

Christine Gilbert is a writer, photographer, and documentary filmmaker and is the creator of the popular blog Almostfearless.com. Gilbert’s site has been mentioned in the Los Angeles Times Web Buzz, the Travel Channel’s World Hum, the Seattle Post-Intelligencer, Brave New Traveler, National Geographic Traveler, and many more publications. Her writing and photography have been seen on Lonely Planet, Rough Guides, and BBC Travel.

Originally from the Boston area, Gilbert now lives in Barcelona, Spain, with her husband, Drew, and their children, Cole and Stella.
Loading...
or
Not Currently Available for Direct Purchase