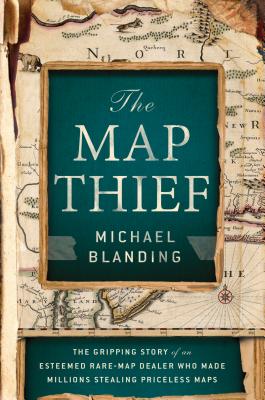 The story of an infamous crime, a revered map dealer with an unsavory secret, and the ruthless subculture that consumed him
Maps have long exerted a special fascination on viewers--both as beautiful works of art and as practical tools to navigate the world. But to those who collect them, the map trade can be a cutthroat business, inhabited by quirky and sometimes disreputable characters in search of a finite number of extremely rare objects.
Once considered a respectable antiquarian map dealer, E. Forbes Smiley spent years doubling as a map thief --until he was finally arrested slipping maps out of books in the Yale University library. The Map Thief delves into the untold history of this fascinating high-stakes criminal and the inside story of the industry that consumed him.
Acclaimed reporter Michael Blanding has interviewed all the key players in this stranger-than-fiction story, and shares the fascinating histories of maps that charted the New World, and how they went from being practical instruments to quirky heirlooms to highly coveted objects. Though pieces of the map theft story have been written before, Blanding is the first reporter to explore the story in full--and had the rare privilege of having access to Smiley himself after he'd gone silent in the wake of his crimes. Moreover, although Smiley swears he has admitted to all of the maps he stole, libraries claim he stole hundreds more--and offer intriguing clues to prove it. Now, through a series of exclusive interviews with Smiley and other key individuals, Blanding teases out an astonishing tale of destruction and redemption.
The Map Thief interweaves Smiley's escapades with the stories of the explorers and mapmakers he knew better than anyone. Tracking a series of thefts as brazen as the art heists in Provenance and a subculture as obsessive as the oenophiles in The Billionaire's Vinegar, Blanding has pieced together an unforgettable story of high-stakes crime.

Michael Blanding is an author and journalist with more than fifteen years of experience writing long-form narrative and investigative journalism and has written for The Nation, The New Republic, Consumers Digest, and The Boston Globe Magazine. He lives in Brookline, Massachusetts.

Praise For The Map Thief: The Gripping Story of an Esteemed Rare-Map Dealer Who Made Millions Stealing Priceless Maps…

"In this cartographic caper, Michael Blanding slips into the antique map trade and takes a magnifying glass to the mind and motivations of a curious character named E. Forbes Smiley III, a New England polymath with a special talent for taking razors to rare books. The setting and the character belong in a novel, and this engrossing book reads like fiction."
—Nina Burleigh, author of the New York Times bestseller The Fatal Gift of Beauty: The Italian Trials of Amanda Knox

"The Map Thief isn't just a perceptive, meticulously researched portrait of an exceedingly unlikely felon.  It's also a tribute to the beautiful old maps that inspired his cartographic crimes--and shaped our modern world."
—Ken Jennings, author of Maphead: Charting the Wide, Weird World of Geography Wonks

"Old maps tug powerfully at the imagination, and not always in healthy ways. Nothing makes that clearer than the strange, unsettling case of Forbes Smiley, whose story Michael Blanding has pieced together in captivating detail. This is an unforgettable and cautionary tale, told by an expert investigative reporter who writes with the narrative flair of a novelist. A great read!"
—Toby Lester, author of The Fourth Part of the World: An Astonishing Epic of Global Discovery, Imperial Ambition, and the Birth of America

"Disgraced map dealer Forbes Smiley once said that he hoped that the stories about his thefts 'would go away.' That might be so. But thankfully Michael Blanding decided otherwise, and he tells a powerful story about the nature of crime, greed and art. Smart, suspenseful, and engaging, this book is a fascinating read."
—Ulrich Boser, bestselling author of The Gardner Heist

"This is a terrific book. The portrait of Forbes Smiley here is one we rarely get of cultural heritage thieves—complete and even-handed, without being either credulous or vindictive. The Map Thief, aside from being wonderfully readable, is a valuable addition to this area of study."
—Travis McDade, author of The Book Thief: The True Crimes of Daniel Spiegelman

"Michael Blanding not only tells the spell-binding tale of a clever and obsessed thief, but he also adds to the field of research into people who commit crimes involving rare and precious items.  All the while, Blanding examines the crimes with the acumen of a seasoned investigator and the skill of a talented writer."
—Anthony M. Amore, co-author of Stealing Rembrandts: The Untold Stories of Notorious Art Heists


Q&A with Michael Blanding, author of The Map Thief

How many maps did Forbes Smiley steal?
Smiley admitted to stealing 97 maps from six libraries—Harvard, Yale, New York Public Library, Boston Public Library, the British Library, and the Newberry Library in Chicago—worth over $3 million in all. However, the libraries accuse him of taking many more. In all, they are missing around 250 maps, and have evidence that he stole at least a dozen of them. The truth probably lies somewhere in the middle—but we may never know for sure exactly how many he stole.

How did he steal them?
In many cases, the maps were contained in rare books, and Smiley was able to go into a library and just rip them out or cut them out with a razor blade when no one was looking. In other cases, he would request a folder full of maps and just take one. Then, he folded them and put them in the pocket of his blazer and just walked right out. Library catalogs often don’t specify which exact maps should appear in which books or folders. So Smiley could rip out a map worth $100,000, and walk out without anyone knowing it was missing. Many of the map library curators knew him as a respected rare-map dealer and trusted him almost like a colleague; he abused that trust to walk out with rare maps right under their noses.

How could he ever sell these rare maps? Wouldn’t someone know they were stolen?
Maps aren’t like works of art, which exist in only one copy and are strictly catalogued by museums. A rare map might exist in a dozen or more copies, both in libraries and private hands, with no way of knowing if another copy isn’t hidden in someone’s attic somewhere. Smiley sold mostly to other dealers he’d worked with for years, and they apparently believed them when he told them that he was quietly selling off copies of old maps from the collection of old clients. When these dealers then sold them to collectors, they could openly display them with no idea that stolen property was hanging in their offices and living rooms.

Wow! How did old maps get to be worth so much?
As art began getting pricier in the 1980s, many wealthy collectors turned to maps as a less expensive way to decorate their homes and display their wealth and knowledge. A doctor or stock broker might not be able to afford millions of dollars for a Monet or a Picasso, but they could afford a few tens of thousands for an original map print that might be equally beautiful, and come with an interesting history going back hundreds of years to boot. Map prices really began skyrocketing in the 1990s, when they became trendy for home decorating.

What did he do with all that money?
Like most thieves, he spent some of the money on luxuries—nice clothes, fancy dinners, travel… But most of it, strangely, went to a small town in Maine that Smiley essentially tried to buy and remake into his vision of a perfect New England village. He bought the post office, a general store, and a restaurant, and spent a lot of money fixing up the town and employing its residents. Not everyone in the town liked his ideas, however, and he ended up getting into a messy feud with the neighbors across the street who owned a marina. Eventually the dispute grew into a lawsuit that divided the whole town.

What caused Smiley to steal?
Smiley was never a good businessman, and from the beginning of his career as a map dealer, he was always overextended and owing money to people. He also claims that his own gallery was robbed back in the late 1980s, putting more pressure on his business. As map prices rose in the 1990s, he began competing fiercely with other dealers, who drove up prices on him at auction and made him pay more for his maps. The final straw, however, was the flap over the town up in Maine; he began hemorrhaging money on legal bills at the same time he was trying to keep his businesses there afloat. One day in a library he realized that he could fold a map into the size of a credit card and slip in his jacket pocket, then sell it the next day for $30,000 to make his payroll up in Maine. That started him down a slippery slope that led to more and more thefts.

How was he caught?
Smiley was caught in June 2005 when an attentive librarian at Yale University noticed an X-acto knife blade he had dropped on the floor. When library staff looked him up, they saw he was a rare-map dealer and began to get suspicious. A Yale police officer followed him out of the library, and when they searched him, they found a map of New England by John Smith in his pocket that they were able to match to one of the books he’d been using. Once he was arrested, the FBI sent out notices to other libraries, which began to discover that they too were missing maps from books Smiley had used. The case unraveled from there.

Where is he now? Is he in prison?
No, he served only three years in prison, despite pleading guilty to $2.3 million in thefts. In part that was because of the assistance he provided to the FBI in recovering the 97 maps, only 18 of which they had enough evidence to charge, earning leniency from the judge. Smiley got out of prison in early 2010, returning to his home on Martha’s Vineyard, which he was able to keep despite the money he still owes to dealers and collectors. Crime doesn’t totally pay, however. Last I spoke with him, he was working as a landscaper making $12 an hour, and still struggling to repay the millions he owes.

Could this kind of theft happen again?
It could and it has. Since Smiley’s sentencing, there hasn’t been a major case of map theft in the United States, though there have been several in Europe to the tune of millions of dollars. Many of the libraries have taken precautions since the Smiley case, increasing security and surveillance, and taking digital photos to catalog their collections. Map dealers, too, have become warier of buying stolen material. However, there is still a great deal of secrecy that is endemic to the map trade. Libraries are often reluctant to publicize when they are missing material, and dealers are often reluctant to reveal what maps they are buying, or ask too many questions about where they came from. All of that makes it easier to get away with selling stolen material. Unless something changes, as one former map librarian told me, it’s not a matter of if there will be another case of rare map theft, but when.