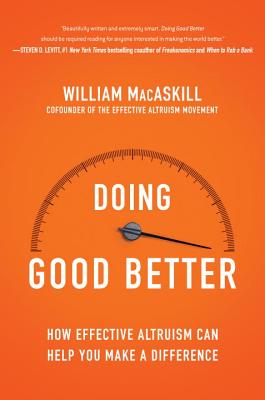 How Effective Altruism Can Help You Make a Difference

Most of us want to make a difference. We donate our time and money to charities and causes we deem worthy, choose careers we consider meaningful, and patronize businesses and buy products we believe make the world a better place. Unfortunately, we often base these decisions on assumptions and emotions rather than facts. As a result, even our best intentions often lead to ineffective—and sometimes downright harmful—outcomes. How can we do better?

While a researcher at Oxford, trying to figure out which career would allow him to have the greatest impact, William MacAskill confronted this problem head on. He discovered that much of the potential for change was being squandered by lack of information, bad data, and our own prejudice. As an antidote, he and his colleagues developed effective altruism, a practical, data-driven approach that allows each of us to make a tremendous difference regardless of our resources. Effective altruists believe that it’s not enough to simply do good; we must do good better.

At the core of this philosophy are five key questions that help guide our altruistic decisions: How many people benefit, and by how much? Is this the most effective thing I can do? Is this area neglected? What would have happened otherwise? What are the chances of success, and how good would success be? By applying these questions to real-life scenarios, MacAskill shows how many of our assumptions about doing good are misguided. For instance, he argues one can potentially save more lives by becoming a plastic surgeon rather than a heart surgeon; measuring overhead costs is an inaccurate gauge of a charity’s effectiveness; and, it generally doesn’t make sense for individuals to donate to disaster relief.

MacAskill urges us to think differently, set aside biases, and use evidence and careful reasoning rather than act on impulse. When we do this—when we apply the head and the heart to each of our altruistic endeavors—we find that each of us has the power to do an astonishing amount of good.

William MacAskill is an Associate Professor in Philosophy at Oxford University and the cofounder of the nonprofit organizations Giving What We Can and 80,000 Hours. These nonprofits have raised over $400 million in lifetime pledged donations to charity and helped to spark the effective altruism movement. He is a contributor to Quartz, the online business magazine of The Atlantic and he and his organizations have been featured in The New York Times, the Wall Street Journal, NPR, and TED, among other media outlets. He lives in Oxford, England.

Praise For Doing Good Better: How Effective Altruism Can Help You Make a Difference…

“Beautifully written and extremely smart. Doing Good Better should be required reading for anyone interested in making the world better.”—Steven D. Levitt, #1 New York Times bestselling co-author of Freakonomics and When to Rob a Bank

“This is the most valuable guide to charitable giving ever published. Even readers who disagree with MacAskill’s conclusions about the value of particular charitable donations will make smarter decisions by learning from his analysis.”—Paul Brest, co-director, Stanford Center on Philanthropy and Civil Society and former president, William and Flora Hewlett Foundation

"A straightforward guide to help anyone make the largest possible difference in the lives of others." —Sue Desmond-Hellman, CEO of the Gates Foundation

"We research hotels and headphones and sushi bars—but not charities. That is lunacy. And in this powerful and persuasive book, William MacAskill shows us how much we stand to gain from a little bit of thoughtfulness: The same donation could do hundreds of times more good if given to the most effective charities, rather than the least"—Dan Heath, co-author of the New York Times bestsellers Made to Stick, Switch, and Decisive

“Effective altruism—efforts that actually help people rather than making you feel good or helping you show off—is one of the great new ideas of the twenty-first century. Doing Good Better is the definitive guide to this exciting new movement.”—Steven Pinker, Johnstone Family Professor of Psychology at Harvard University and author of The Better Angels of Our Nature

“Doing Good Better is a superb achievement. This must-read book will lead people to change their careers, their lives, and the world, for the better.”—Peter Singer, Ira W. DeCamp Professor of Bioethics at Princeton University, author of Animal Liberation and The Most Good You Can Do

“Doing Good Better is a must-read for anyone with both a heart and a brain. MacAskill demolishes the lazy myths of nothing-you-can-do-ism and demonstrates the power of asking the right questions. This is an important book. It's also surprisingly fun. Figuring out what really helps people is a challenging scientific puzzle, and these pages are full of unexpected twists—enlightening and invigorating.”—Joshua Greene, director of Harvard's Moral Cognition Lab, author of Moral Tribes

“Humanity currently spends more money on cigarette ads than on making sure that we as a species survive this century. We've got our priorities all wrong, and we need effective altruism to right them. If you want to make a real difference on the biggest issues of our time, you need to read Doing Good Better.”— Jaan Tallinn, cofounder, Skype and Kazaa

“Doing Good Better has rare combination of strikingly original ideas, effortless clarity of delivery, and a thoroughgoing practicality that leaves the reader inspired to get out of their chair and take on the world. Humanity faces some big challenges in the 21st century; this is a much-needed manifesto for social change, and Will MacAskill is the ideal ambassador.”—Eric Drexler, founder of nanotechnology and author of Engines of Creation

“MacAskill tackles a monumental question: how can we make the biggest difference for the greatest number of people? His answer is a grand vision to make giving, volunteering, spending, and working more worthwhile.”—Adam Grant, New York Times bestselling author of Give and Take

“Are you interested in giving away money more effectively?  This is the very best book on how to do that.” —Tyler Cowen, Holbert C. Harris Professor of Economics at George Mason University and author of Average is Over

“I wish I'd had this structure and insights twenty years ago!”—Caroline Fiennes, Director, Giving Evidence
or
Not Currently Available for Direct Purchase
Copyright © 2020 American Booksellers Association