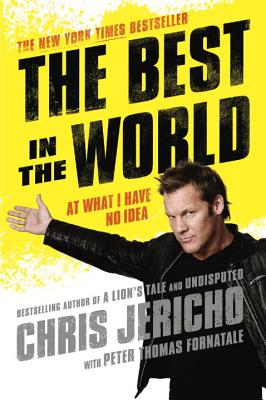 The Best in the World

The New York Times bestselling author,  WWE champion, international rock star, and over-the-top media personality returns with a hilarious memoir of his adventures in the worlds of pro wrestling, music, and showbiz.

In The Best in the World, Chris Jericho treats his fans to a completely uncensored chronicle of his misadventures within WWE rings and onstage with his band, Fozzy. Written with his trademark self-effacing humor, this memoir is laced with behind-the-scenes looks at the preposterous situations he’s all too prone to get himself into, including incredible stories about his dealings with WWE head honcho Vince McMahon; his feuds with Rey Mysterio and CM Punk; his legendary battle with Shawn Michaels; how he took one on the chin from Mike Tyson and Mickey Rourke; his encounters with pop culture icons such as Ozzy Osbourne, Lorne Michaels, Slash, James Hetfield, and Bob Barker; and his six-week stint on Dancing with the Stars.

But whether Chris is enjoying success or falling on his face, Jerichoholics worldwide will come away from this book agreeing on one thing: Chris is the best in the world...at providing yet another hugely entertaining read!


Praise For The Best in the World: At What I Have No Idea…

“Jericho could quickly become the ‘undisputed’ wrestling-author champion of the world.”—Bleacher Report

Chris Jericho is the author of three New York Times bestsellers (A Lion’s Tale, Undisputed, The Best in the World), a six-time WWE World Heavyweight Champion, the lead singer of Fozzy, the host of the podcast Talk Is Jericho, and an accomplished lake-monster hunter. He splits his time between touring the world and his home in Tampa where he plays with his three kids daily.

Peter Thomas Fornatale is a writer who lives in Brooklyn, New York.