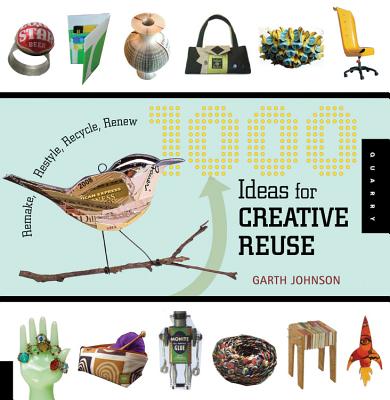 This is a photo gallery of funky and somewhat outrageous art objects made from recycled found materials in all media. Johnson (art, Coll. of the Redwoods) assembled this collection of works by established studio artists as a source of ideas for crafters.  -- Library Journal, February 15, 2010

Garth Johnson is a studio artist, writer and educator who lives in Eureka, California. In addition to maintaining the website \u0022Exteme Craft\u0022 (www.extremecraft.com) Garth writes for CRAFT magazine and his writing has been featured in museum catalogs, magazines, and books worldwide, including a contribution to the upcoming book Handmade Nation from Princeton Architectural Press. His first DVD, ReVision: Recycled Crafts for Earth-Friendly Living will be released by Eyekiss Films later this year. His artwork was featured in a solo show at Gallerie Maxim in Cologne, Germany in August, 2008. Garth received a BFA from the University of Nebraska-Lincoln and an MFA from Alfred University. He has taught at Georgia State University, Columbus State University and is currently a full-time instructor at College of the Redwoods in Eureka, CA. In addition to teaching, he is a sought-after lecturer and visiting artist, with recent lectures at Ohio State University, Illinois State University, and the Kansas City Art Institute.
Loading...
or support indie stores by buying on