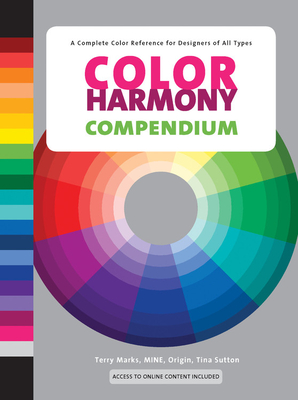 A Complete Color Reference for Designers of All Types, 25th Anniversary Edition

A selection of content from the entire Color Harmony library offers readers the most comprehensive reference book on the usage of color available today. Included is exclusive access to a downloadable application that allows users to choose layouts, logos, and package details featured in the book, experiment with colors, and print them for reference.

Terry has created projects for clients ranging from DC Comics to Microsoft, and was the co-chair of the activity book for hospitalized and chronically ill children. Terry is also the author of Mr. Crumbly Dreams a Tiger and Rules for Success. He lives in Seattle, WA.

Christopher Simmons, founding principal of MINE, is a designer, writer, and educator. He is an instructor in identity design at California College of the Arts and at Academy of Art University in San Francisco, and is a frequent lecturer on design issues at colleges, universities, and professional organizations. Simmons is president of the San Francisco chapter of the American Institute of Graphic Arts (AIGA). His first book on identity design, Logo Lab, was released in 2005. He lives in San Francisco.

Terry Marks (Seattle, WA) is the author of Mr. Crumbly Dreams a Tiger and Rules for Success. Christopher Simmons of MINE is an instructor in identity design at California College of the Arts and at Academy of Art University in San Francisco. Jim Mousner, of Origin Design, has had work featured in publications such as Print, HOW, and \u00c9migrÅ , and been published in many books. Tina Sutton speaks on "The Psychology of Color" at many school, businesses, and museums. She writes a weekly column for the Boston Globe Magazine.

Tina Sutton is a veteran color, consumer trends, and fashion marketing consultant for product developers, corporations, and advertising agencies. She has researched, written about, and lectured on the psychology of color for numerous publications, arts institutions, and television and radio programs nationwide. Sutton is also a longtime style and features writer for The Boston Globe, and author of The Making of Markova: Diaghilev’s Baby Ballerina to Groundbreaking Icon, a highly regarded biography of legendary dancer Alicia Markova.