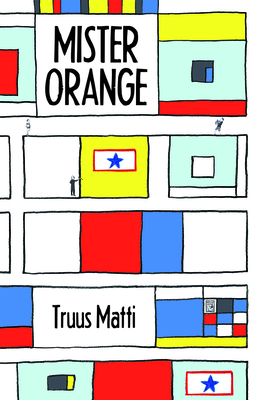 The year: 1943. The place: Manhattan. Linus Muller works at the family grocery store in the east 70s. When his oldest brother, Albie, leaves to fight in World War II, Linus takes over the grocery deliveries. One of his customers is an artist from somewhere in Europe who arranges to have a crate of oranges delivered every other week. Over the course of these deliveries, an intimacy develops between Linus and the man, whom he knows only by the name he gives him, Mister Orange. In the peacefulness of Mister Orange's spare kitchen, they discuss the war, the future, freedom and imagination. Through these conversations, Linus begins to grow up as he wrestles with the realities of war and the place of comic books, superheroes and the imagination in human life.

As a child Truus Matti thought that everybody wanted to become a writer just like her. It made her wonder who would read all of the books that were written. Being a practical person, she decided it made more sense to read books than to write them, so she made reading her profession by becoming an editor. That kept her so busy she more or less forgot about wanting to write. Later on, she decided to go to art school, where she drew and made movies. But then words began to find their way into her visual work until there were only words left. Having given herself a message, Truus decided it was time to write. Mister Orange is Truus's second novel. Her first, Departure Time, was a 2011 Batchelder Honor Book and an ALA Notable Book of 2011.
Loading...
or
Not Currently Available for Direct Purchase