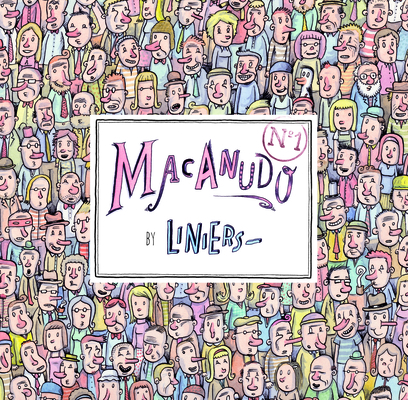 Anyone can draw a cat, anyone can draw a little girl or a man with a hat, but not everyone can make that cat, that little girl and that man with a hat different from any we've ever seen before and have them become part of our world, as if we knew them personally. Liniers draws characters, and his characters are macanudos, which is to say extraordinary and awesome. And he draws them so well that they're all lovely, even the ugly ones are so perfectly ugly that they're beautiful. Loners, with a pop innocence that's sometimes a bit perverse, they move elegantly between sadness and astonishment, like anonymous actors in small B movies.--Maitena

In Macanudo, Ricardo Liniers Siri uses crayon, ink, and watercolor with incredible skill to render an entire world that is poetic, absurd, emotionally expressive, and full of surprise. Anything and everything about our world can find its way into Macanudo, but it will have passed through Liniers's particular filter, and it thus will have become rendered funny, beautiful, and incredibly sympathetic.

Ricardo Liniers Siri was born in 1973 in Buenos Aires, Argentina, where he now lives with his wife and three daughters. For more than ten years he has published an enormously popular daily strip, Macanudo, in Argentina's largest daily newspaper, La Nacion. Up until now, nine collections of the strip have been published in Argentina. He also travels around the world drawing on stage with musician Kevin Johansen. His work has been published in nine countries, including Spain, Italy, France, Brazil, and the Czech Republic. His first book to be published in the United States was The Big Wet Balloon (September 2013).

Liniers: Liniers was born in Buenos Aires in 1973. He has created many illustrations & comics for the press, collections and anthologies. His series Macanudo is published daily in Argentina's largest newspaper, La Nacion.
Loading...
or support indie stores by buying on