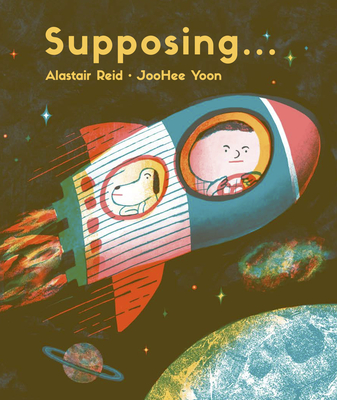 Follow unexpected possibilities on fanciful and humorous journeys, powered by the limitlessness of the imagination and the openness of the human spirit.

SUPPOSING I looked in the mirror one day and saw someone who wasn't me at
all...

SUPPOSING I sailed around the world and when I
was a mile from my hometown, I just turned the boat and sailed round again the
other way...

Supposing leads to pondering a chain of hypothetical events that play with the
way that things are, daring to imagine a world beyond the laws of physics and
unbeholden to societal conventions. Each sentence may start with the same word
"SUPPOSING," but it's impossible to predict where the zany musings will lead

Alastair Reid's text, still as delightful and fresh as it was in 1960, is
accompanied by new, dazzlingly vibrant illustrations from JooHee Yoon.

Alastair Reid was a poet, a prose chronicler, a translator, and a traveler. Born in Scotland, he came to the United States in the early 1950s, began publishing his poems in the New Yorker in 1951, and for the next fifty-odd years was a traveling correspondent for that magazine. Having lived in both Spain and Latin America for long spells, he became a constant translator of poetry from the Spanish language, in particular the work of Jorge Luis Borges and Pablo Neruda. In his lifetime, he published more than forty books, among them a classic wordbook for children, Ounce Dice Trice, with drawings by Ben Shahn. In 2008, he published in the U.K. two career-spanning volumes, Outside In: Selected Prose and Inside Out: Selected Poetry and Translations. His Barefoot: The Collected Poems was published posthumously in 2018. The substance of Supposing... he gleaned from the many children who have influenced him, to all of whom he owes and dedicates the text. JooHee Yoon is an illustrator and printmaker committed to the art of bookmaking. She enjoys combining illustration with design whenever possible and using both traditional and industrial printing techniques for her projects. Rather than a single approach, she tries to match the tone of each project. She strives to create picture books that work on many levels and can be enjoyed by people of all ages.
Loading...
or support indie stores by buying on