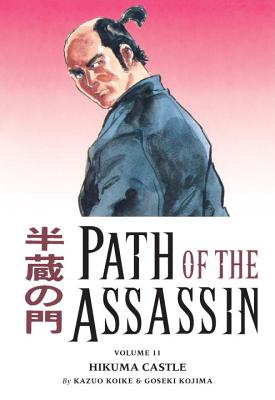 Path of the Assassin Volume 11

Ninjas, samurai, hot lovin', political intrigue, and gold! Path of the Assassin has it all in spades!

Hanzo, the hero ninja for the future shogun Ieyasu Tokugawa, has been in some tight situations before, but nothing like the trap set for him by a ninja from a competing warlord's clan! And to settle this trickery, a sexy battle of wits and weapns. Meanwhile, Tokugawa is moving across the battlefield on his way to Japan's future.

Path of the Assassin is a pinnacle in (Lone Wolf and Cub creators) Koike and Kojima's fantastic and seemingly unending stable of awesome samurai manga. And as usual, these works don't wane as they draw toward their final volumes!

Kazuo Koike is a prolific Japanese manga writer, novelist, and entrepreneur. Early in Koike's career, he studied under Golgo 13 creator Takao Saito and served as a writer on the series. Koike, along with artist Goseki Kojima, made the manga Kozure Okami (Lone Wolf and Cub), and Koike also contributed to the scripts for the 1970s film adaptations of the series, which starred famous Japanese actor Tomisaburo Wakayama. Another series written by Koike, Crying Freeman, which was illustrated by Ryoichi Ikegami, was adapted into a 1995 live-action film by French director Christophe Gans.

Goseki Kojima was a Japanese manga artist known for his collaborations with Kazuo Koike. The team was often referred to as the “Golden Duo.” Kojima’s best-known work was Lone Wolf and Cub. Other titles attributed to Kojima are Samurai Executioner and Path of the Assassin. In 2004, Kojima won an Eisner Award.
Loading...
or
Not Currently Available for Direct Purchase