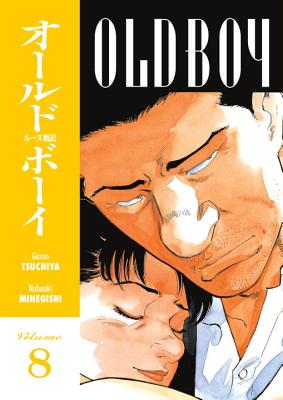 Imprisoned without explanation for a decade by a wealthy former schoolmate, Goto now comes to the endgame against his tormentor. If Goto cannot uncover the secret behind the schoolyard grudge, he’ll earn his death and the death of the girl he loves — just as his adversary will accept death if Goto can unlock his memories and the meaning behind them. But there’s more to the game locked away in memories, and even the end of the game may not mean the end to the war!

Garon Tsuchiya is a manga writer who is best known for Old Boy, with artist Nobuaki Minegishi, which won an Eisner Award in 2007 and was adapted in mystery-thriller noir film by director Park Chan-wook. His other credits include Astral Project and Reverse Edge: Ōkawabata Tanteisha.

Nobuaki Minegishi is a manga artist. He is best known as the illustrator of the acclaimed manga Old Boy, which was adapted into the award-winning movie Oldboy by Park Chan-wook. In 2007 Old Boy won the Eisner Award for Best U.S. Edition of International Material—Japan. Minegishi has also worked on series such as Aburemon, Jungle, Tenpai, Hoozuki, Joi Reika, and Maboroshi No Kakero.
Loading...
or
Not Currently Available for Direct Purchase