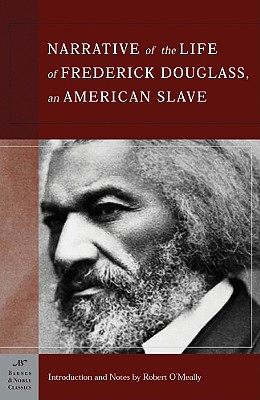 The Narrative of the Life of Frederick Douglass, an American Slave (Barnes & Noble Classics Series)

Narrative of Frederick Douglass, An American Slave, by Frederick Douglass, is part of the Barnes & Noble Classics series, which offers quality editions at affordable prices to the student and the general reader, including new scholarship, thoughtful design, and pages of carefully crafted extras. Here are some of the remarkable features of Barnes & Noble Classics: All editions are beautifully designed and are printed to superior specifications; some include illustrations of historical interest. Barnes & Noble Classics pulls together a constellation of influences--biographical, historical, and literary--to enrich each reader's understanding of these enduring works. No book except perhaps Uncle Tom's Cabin had as powerful an impact on the abolitionist movement as Narrative of the Life of Frederick Douglass. But while Stowe wrote about imaginary characters, Douglass's book is a record of his own remarkable life. Born a slave in 1818 on a plantation in Maryland, Douglass taught himself to read and write. In 1845, seven years after escaping to the North, he published Narrative, the first of three autobiographies. This book calmly but dramatically recounts the horrors and the accomplishments of his early years--the daily, casual brutality of the white masters; his painful efforts to educate himself; his decision to find freedom or die; and his harrowing but successful escape. An astonishing orator and a skillful writer, Douglass became a newspaper editor, a political activist, and an eloquent spokesperson for the civil rights of African Americans. He lived through the Civil War, the end of slavery, and the beginning of segregation. He was celebrated internationally as the leading black intellectual of his day, and his story still resonates in ours.

Robert O'Meally is Zora Neale Hurston Professor of Literature at Columbia University and the Director of Columbia University's Center for Jazz Studies. He wrote the introduction and notes to the Barnes & Noble classics edition of The Adventures of Huckleberry Finn.
Loading...
or support indie stores by buying on
(This book is on backorder)