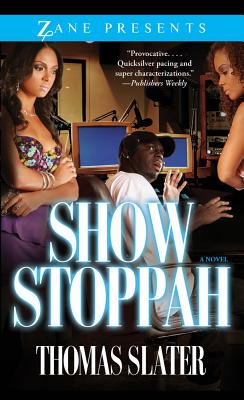 The courageous story of two women who overcome domestic abuse, kidnapping, and contract killings and end up commandeering a radio station—to make their voices heard.

Homeless at sixteen, Kimpa fell in love with an a spiring writer-turned-pimp and started selling her body to buy a piece of the American dream.

After Isis witnessed her handsome lover commit murder, she realized he wasn’t an FBI agent but a hit man— and she was his hostage.

Frustrated beyond limits and bound together by heartache, physical abuse, and betrayal, Kimpa and Isis design an elaborate plan for revenge. Armed with automatic weapons, they storm a radio station in the early morning hours, taking over the airwaves in hopes of inspiring and uniting battered women across the nation. And even though police have sealed off the building and large crowds have gathered outside the station, these two women will only surrender once their stories have been told.

Thomas Slater is a native of Detroit, Michigan. He is the author of Show Stoppah and No More Time-Outs, and under the pen name, Tecori Sheldon, he is the author of When Truth is Gangsta. He hopes to create a footprint by stepping off into the cement of literary greatness. Visit the author at SlaterBoyFiction.com, Facebook.com/ThomasESlater, and Twitter @EarlWrites.
Loading...
or
Not Currently Available for Direct Purchase