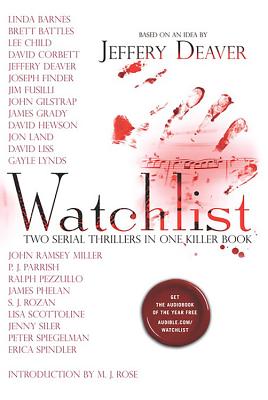 Watchlist is a unique collaboration by twenty-one of the world¿s greatest thriller writers including Lee Child, Joseph Finder, David Hewson, S.J. Rozan, Lisa Scottoline, and Jeffery Deaver, who conceived the characters and set the plot in motion; In turn, the other authors each wrote a chapter and Deaver then completed what he started, bringing each novel to its startling conclusion.

Former war crimes investigator Harold Middleton possesses a previously unknown score by Frédéric Chopin. But he is unaware that, locked within its handwritten notes, lies a secret that now threatens the lives of thousands of Americans.

Harold Middleton returns in this explosive sequel to The Chopin Manuscript as he¿s drawn into an international terror plot that threatens to send India and Pakistan into full-scale nuclear war.

International Thriller Writers, Inc. (ITW) was founded in 2004 and is the largest group of thriller writers in the world, representing over two billion books in print, with over one hundred New York Times bestselling authors on its roster. ITW is an innovator in creating unusual marketing opportunities to promote its author¿s books and expand the reach of the genre. Founded by Gayle Lynds and David Morrell, the board of directors has included such luminaries as Lee Child, Tess Gerritsen, James Rollins, Jon Land, Carla Neggers, MJ Rose, Douglas Preston, and David Dun. ITW¿s first anthology, the bestselling Thriller, edited by James Patterson, has sold over 150,000 copies.