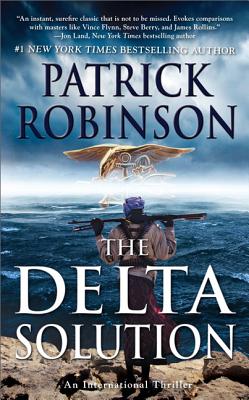 New York Times bestselling author Patrick Robinson is back with the third thriller in his page-turning Mack Bedford series: The Delta Solution.

For years, heavily armed Somali pirates have been capturing and holding for ransom massive cargo ships, violently demanding millions of dollars for their return. Each time an owner pays big for the return of their ship, the pirates immediately capture again, enraging the Pentagon. That is, until the "Somali Marines" make a big mistake, seizing at gun point two United States ships and demanding a $15 million ransom.

Hero Mack Bedford, previously encountered in Diamondhead and Intercept, is deployed to SEAL Team 10 to form The Delta Platoon. His objective: obliterate the Somali Marines in the middle of the Indian Ocean, at all costs, once and for all.


Praise For The Delta Solution…

“The high-action thriller lives on. Here is a rare tale that’s not only ripped-from-the-headlines timely, but also so elegantly structured as to evoke comparisons with masters like Vince Flynn, Steve Berry, and James Rollins. An instant, surefire classic that is not to be missed.”
—Jon Land, bestselling author of Strong Justice

“Readers will cheer as Mack and his team solve the vexing problem of Somali pirates.”
—Publisher’s Weekly

Patrick Robinson is the coauthor of the recent New York Times #1 nonfiction bestseller Lone Survivor. He is also the author of several internaÂ­tional bestselling U.S. Navy-based novels, including Intercept, Diamondhead, To the Death, and The Delta Solution, as well as several nonfiction bestsellers, including his New York Times bestseller A Colossal Failure of Common Sense: The Inside Story of the Collapse of Lehman Brothers, and the international bestseller One Hundred Days. He lives in the Cayman Islands and and spends his summers in Cape Cod, Massachusetts.
Loading...
or
Not Currently Available for Direct Purchase