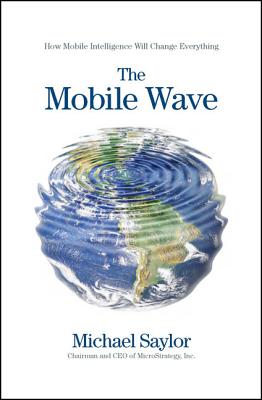 How Mobile Intelligence Will Change Everything

In the tradition of international bestsellers, Future Shock and Megatrends, Michael J. Saylor, CEO of MicroStrategy, brings The Mobile Wave, a ground-breaking analysis of the impact of mobile intelligence—the fifth wave of computer technology.

The Mobile Wave argues that the changes brought by mobile computing are so big and widespread that it’s impossible for us to see it all, even though we are all immersed in it. Saylor explains that the current generation of mobile smart phones and tablet computers has set the stage to become the universal computing platform for the world. In the hands of billions of people and accessible anywhere and anytime, mobile computers are poised to become an appendage of the human being and an essential tool for modern life.

With the perspective of a historian, the precision of a technologist, and the pragmatism of a CEO, Saylor provides a panoramic view of the future mobile world. He describes how:


Products, businesses, industries, economies, and even society will be altered forever as the Mobile wave washes over us and changes the landscape. With so much change, The Mobile Wave is a guidebook for individuals, business leaders, and public figures who must navigate the new terrain as mobile intelligence changes everything.

Michael Saylor is the chairman and CEO of the publicly traded company MicroStrategy. With degrees in engineering as well as Science, Technology, and Society from MIT, he is a science historian, and a formidable intellectual whom "Slate "called "mesmerizing." He is not just a high-tech entrepreneur, but also a serious scholar whose success in business stems from his obsession since college--and really since childhood--with understanding what Thomas Kuhn called the "structure of scientific revolutions." He has appeared on TV interview shows including "60 Minutes" and "Charlie Rose," and has been profiled in "Newsweek," "Time," "Slate," "The New Yorker," and "The Washington Post."

Praise For The Mobile Wave: How Mobile Intelligence Will Change Everything…

“The visionary picture he paints of the future is captivating, informative, and thought-provoking. The MIT-educated Saylor exhibits a deep knowledge of the mobile world, and gives readers a peek free of boring geek-speak. Readers will be able understand and appreciate his clear and engaging exploration of a complex, red-hot, and thoroughly up-to-the minute topic.”
—USA Today

"It is a thoughtful romp across invention and innovation -- and blessedly free of MicroStrategy sales pitches."
—Fortune

"In The Mobile Wave his vision is clear—we face a future in which paper, devices such as phones, credit cards and cash, entertainment venues, doctor’s office visits, and even the classroom will be obsolete, or nearly so. He wants everyone on the bandwagon, from toddlers to grandparents."
—Washingtonian Magazine