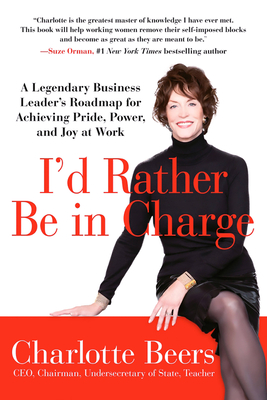 I'd Rather Be in Charge

A Legendary Business Leader's Roadmap for Achieving Pride, Power, and Joy at Work

Charlotte Beers is proof that women can achieve power, pride, and joy at work-despite the odds.

In the highly competitive and often cutthroat world of advertising, Charlotte became the first female ever to head two giant, multinational advertising agencies. In serving her demanding clients, she helped build many of the most important brands around the world.

Today, Charlotte rates her current title-teacher-her most satisfying, as she travels through the United States and Europe educating women on how to ignite their own strengths, in what she calls "the era of forging ahead for women."

Her pioneering experiences have been captured in I'd Rather Be in Charge, creating a blueprint for women as they face their own challenges and strive to achieve the positions of leadership and influence they deserve.

Told in an intimate and honest style, I'd Rather Be in Charge is part personal history, part pragmatic guide, as Charlotte describes her own experiences, lessons from her peers such as Martha Stewart and Suze Orman, as well as stories of her students' transformations. By chronicling both successes and mistakes, Charlotte proves that finding your own personal style of leadership is the only way to take charge, find satisfaction, and gain confidence in the ever-evolving workplace of today.

I'd Rather Be in Charge is a breakthrough book. It is a master class for women who are ready to shatter their own glass ceilings.

Praise For I'd Rather Be in Charge: A Legendary Business Leader's Roadmap for Achieving Pride, Power, and Joy at Work…

“Charlotte is the greatest master of knowledge I have ever met. This book will help working women remove their self-imposed blocks and become as great as they are meant to be.”
—Suze Orman, #1 New York Times bestselling author

"A role model and champion to all women who want to make the most of their careers, Beers offers useful guidance on how to seize opportunities, be influential, and shape events."
—Publishers Weekly

“Reading I’d Rather Be in Charge, I found myself reflecting on my own way of teaching and leading. Charlotte candidly shares with us how she found her own unique path to influence in her exceptional journey in Corporate America and gives us precious advice on how to find ours. I will draw on some of her lessons in my Power and Influence class this season.”
—Julie Battilana, Associate Professor of Business Administration, Harvard Business School

“Charlotte Beers goes straight for the jugular with tales from her meteoric career in advertising. But her true gift is ultimately the ability to teach us all how to be both memorable and persuasive in our own communications. A must read that combines wit and wisdom in equal measure.”

Texas-born Charlotte Beers has combined her business insight with an innate Southern charm to become a legend in the competitive world of advertising. Featured on the covers of Fortune and Businessweek as one of the most powerful women in America, Charlotte and her mantra of the difference between products and brands revolutionized major ad campaigns brought unprecedented success to her clients and the advertising agencies she managed.

Charlotte began her career in advertising as an account executive at J. Walter Thompson Advertising, later becoming the first female senior vice president in the firm's history. From J. Walter Thompson, Charlotte brought her skills to Tatham-Laird & Kudner as CEO. Her success led her to her next position as chairman/CEO of Ogilvy & Mather Worldwide, a multinational advertising agency. Harvard Business School still teaches their bestselling case study on leadership entitled "Charlotte Beers at Ogilvy."

Charlotte currently serves on the board of Martha Stewart Living Omnimedia and conducts seminars throughout the United States and Europe, teaching women the tools for transforming themselves into managers and leaders in the many industries they represent.