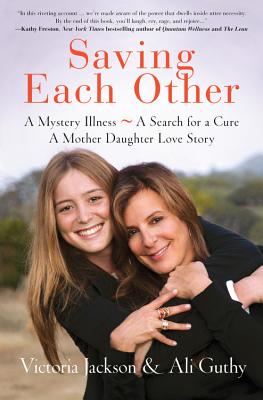 On the surface, Victoria Jackson is the American Dream personified: from a troubled childhood and unfinished high school education, she overcame immeasurable odds to create a cosmetics empire valued at more than half a billion dollars. Married to Bill Guthy—self-made principal of infomercial marketing giant Guthy-Renker—Victoria’s most treasured role is mother to three beautiful, beloved children, Evan, Ali, and Jackson.
Suddenly, Victoria’s dream life is broken as she begins to battle a mother’s greatest fear. In 2008, her daughter, Ali, began experiencing unusual symptoms of blurred vision and an ache in her eye. Ali’s test results led to the diagnosis of Neuromyelitis Optica. NMO is is a little understood, incurable, and often fatal autoimmune disease that can cause blindness, paralysis, and life-threatening seizures, and afflicts as few as 20,000 people in the world. At the age of 14, Ali was given a terrifying prognosis of four to six years to live.
Saving Each Other: A Mother Daughter Love Story begins just as Victoria and Bill learn of Ali’s disease, starting them on a powerful journey to save Ali, their only daughter, including bringing together a team of more than fifty of the world’s leading experts in autoimmune and NMO-related diseases to
create the Guthy-Jackson Charitable Foundation.
Told in alternating viewpoints, Victoria and Ali narrate their very different journeys of coming to terms with the lack of control that neither mother nor daughter have over NMO, and their pioneering efforts and courage to take their fight to a global level.
Bringing their story to light with raw emotion, humor, warmth, and refreshing candor, Saving Each Other is the extraordinary journey of a mother and daughter who demonstrate how the power of love can transcend our greatest fears, while at the same time battling to find a cure for the incurable.

Praise For Saving Each Other: A Mother-Daughter Love Story…

"Sometimes we're given a physical or spiritual challenge that we have no idea how we're going to rise to.  In this riveting account of a mother-daughter love story and their urgent search for a cure, we're made aware of the power that dwells inside utter necessity.  By the end of this book, you'll laugh, cry, rage, and rejoice...and you'll feel that lovely connection to life that you only get when you pass through your dark night of the soul."
—Kathy Freston, New York Times bestselling author of Quantum Wellness and The Lean

"Any parent or child will be moved and inspired by this story of how love and dedication can conquer pain and fear; a vivid reminder that there is nothing more powerful or enduring than the bond of mother and daughter."
—New York Times bestselling author Rob Lowe

“This is a spectacular and gripping story of personal courage and entrepreneurial creativity, involving a mother and daughter. It is a story of medical researchers and disease detectives working hard to cure a young woman's frightening disease. The saga is ongoing, exciting and full of drama and hope.”
—Larry Steinman MD, Professor of Neurology and Pediatrics Stanford University and Chairman of Immunology 2002-2011

"I once said that life is found in the dance between your deepest desire and your greatest fear. Saving Each Other is about a pathway where two women face their greatest fears and experience their deepest desires together as they take on an incurable disease. It’s quickly obvious this disease is no match for the powerful combination of a mother’s love and devotion with a child’s hope, determination and will. You will be moved and inspired as you go on a journey with these two extraordinary women and find newfound courage within yourself."
—Anthony Robbins, New York Times bestselling author, internationally-acclaimed speaker, and peak performance expert


"Saving Each Other is a love story, a medical mystery, and also the proof we badly need that cooperation beats competition every time. This is an irresistible book that inspires readers—and could reform experts.”
—Gloria Steinem

“I’ve made a career telling inspirational women’s stories.  This real life story is a triumph.  Saving Each Other is about a mother and daughter bonding over love, maturity and survival. Victoria and Ali, two people I’ve admired for years, have written an incredibly moving and important story that must be shared.”
—Garry Marshall

"The unstoppable power of these two extraordinary women is an unforgettable and inspirational experience you will carry in your heart forever."
—Dustin Hoffman

“As a woman, mother, and close friend of the authors, I find this story deeply moving on so many levels.  The work that I’ve seen Victoria, Ali, and the foundation undertake has been extraordinary, especially in bringing doctors together to share ideas and create a dialogue that wasn’t there before.  As their experts grow closer to finding better, more effective treatments for this disease, they can open the door for solutions to many other diseases—and that’s just incredible!”
—Reese Witherspoon

“Saving Each Other is a testament to a mother’s incredible strength and a daughter’s unshakable courage.  However, it is so much more than that. The Guthy/Jackson family’s journey in fighting Ali’s disease – and their refusal to give up – is beyond inspirational; it is truly one of the greatest love stories I’ve ever read. This wonderful book will make you laugh and cry.  But most of all, you will cheer for this amazing family’s unfailing tenacity and hope in the face of enormous obstacles and fear.  Their fight will ultimately help save countless other lives.”
—Sherry Lansing, CEO, The Sherry Lansing Foundation

Having achieved success as a Hollywood makeup artist, cosmetics entrepreneur and television infomercial pioneer, Victoria Jackson prefers to think of herself as “a goodwill ambassador for makeup.”

A recognized trailblazer in the infomercial industry, Jackson altered a global beauty aesthetic with her “no makeup makeup”—a foundat ion that was the cornerstone of her eponymous line Victoria Jackson Cosmetics, which has enjoyed over a half billion dollars in sales, and continues to grow.

Jackson has also garnered a devoted following through her two briskly selling books: Redefining Beauty: Discovering
Your Individual Beauty, Enhancing Your Self-Esteem and Make Up Your Life: Every Woman’s Guide to the Power of Makeup, a deeply personal account of her experiences in business.

Today, Victoria’s primary focus is the Guthy-Jackson Charitable Foundation, which is dedicated to funding biomedical research in the search to understand the pathophysiology and biochemistry of Neuromyeltis Optica (NMO) Spectrum
Disease. It is her greatest hope that “together we will reverse the effects of NMO and eventually cure this disease.”

Married to husband Bill Guthy of infomercial giant Guthy-Renker, Victoria Jackson is the mother of three children and together they reside in Los Angeles.

Ali Guthy, a student at the University of California, Santa Barbara, has kept a journal since she was a young girl. At The Buckley School in Los Angeles, she served as co-editor-in-chief for her high school’s award-winning newspaper, The
Student Voice. She is also the managing editor of The Spectrum, the newsletter she created with the Guthy-Jackson Charitable Foundation. While at Buckley, she had record-setting achievements on the tennis court, finishing with an overall winning record of 165-22. Ali also received Buckley’s coveted Head of School Award—given to a student who demonstrated leadership, academic achievement, character, and service on behalf of the school and community. Ali has also been honored with numerous awards and in the media for giving a public face to NMO and for her leadership in reaching out to newly diagnosed patients and their families.