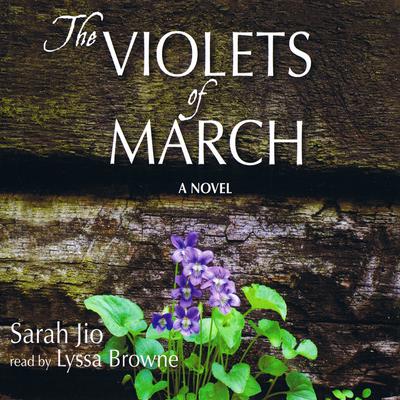 The Violets of March (Digital Audiobook)

In her twenties, Emily Wilson was on top of the world: she had a bestselling novel, a husband plucked from the pages of GQ, and a one-way ticket to happily ever after. Ten years later, the tide has turned on Emily's good fortune. So when her great-aunt Bee invites her to spend the month of March on Bainbridge Island in Washington State, Emily accepts, longing to be healed by the sea. Researching her next book, Emily discovers a red velvet diary, dated 1943, whose contents reveal startling connections to her own life. A mesmerizing debut with an idyllic setting and intriguing dual story line, The Violets of March announces Sarah Jio as a writer to watch.

Sarah Jio is the author of "The Violets of March," her debut novel. Based in Seattle, she's been the health and fitness blogger for Glamour.com and a contributor to major magazines, including Real Simple, Redbook, O, The Oprah Magazine, Cooking Light, Glamour, SELF, Health, American Baby and many others. She has also appeared as a commentator on NPR's Morning Edition. Her website is www.sarahjio.com.
Loading...