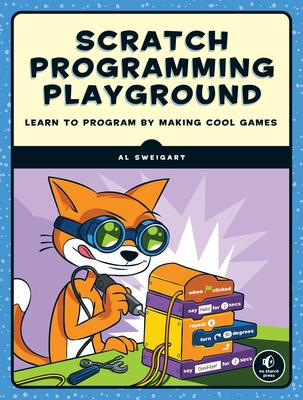 Scratch, the colorful drag-and-drop programming language, is used by millions of first-time learners, and in Scratch Programming Playground, you’ll learn to program by making cool games. Get ready to destroy asteroids, shoot hoops, and slice and dice fruit!

Each game includes easy-to-follow instructions, review questions, and creative coding challenges to make the game your own. Want to add more levels or a cheat code? No problem, just write some code.

Learning how to program shouldn’t be dry and dreary. With Scratch Programming Playground, you’ll make a game of it!

Al Sweigart is a software developer and teaches programming to kids and adults. He has written several Python books for beginners, including Automate the Boring Stuff with Python, Invent Your Own Computer Games with Python, and Making Games with Python & Pygame.
Loading...
or support indie stores by buying on
(This book is on backorder)