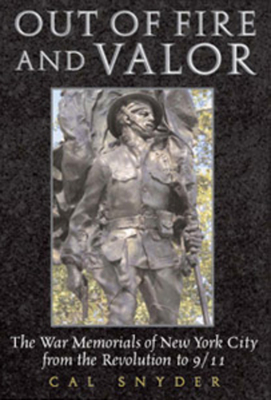 Out of Fire & Valor

The War Memorials of New York

New York City embraces the nation's greatest collection of memorials to the deeds and sacrifices of war. Numbering in the hundreds, from the humblest neighborhood plaque to the grandest civic settings, they tell a poignant tale written on the city's heart for almost two and a half centuries. We have monuments to famous battles, tributes to the bravery of individuals and the careers of generals, and paeans to the exploits of great fighting regiments. This treasure-house of bronze and stone sculpture, chaste temples and soaring obelisks, altars to sacrifice and freedom, and simple neighborhood steles also records the words spoken for the millions of New Yorkers who rose for their country whenever the fires of war were lighted. Out of Fire and Valor offers the reader an introduction to this remarkable legacy. Through a series of short essays, illustrated by 140 photographs, it examines how America evolved its sculptural and memorial traditions, and how they were adapted to the purposes of war remembrance. Each of the great memorial epochs is covered: The American Revolution and Civil War, the Spanish-American War and First World War, and then World War Two and the post-war decades. This story--of the arts of memory--is set upon the stage of the city's own growth, its seeking for identity, and the role of the elites and the immigrants who formed its soul and sent their sons to war for an adopted homeland. Their tributes remind us that our memorial landscape is more than a record of art and cultural history; it is foremost a legacy of sacrifice raised up for the city's sons and daughters by those who gave and remembered them. The book's second part is a descriptive catalog of 159 memorials, including three maps that provide convenient walking tours in Manhattan and Brooklyn. For interested readers, a much more extensive illustrated catalog to several hundred city memorials is offered at the book's website. The war memorials of New York City, from Battle Pass to Ground Zero, form a remarkable legacy. It is one of unstinting courage, pride and heartbreak, and a search for honest remembrance by now-forgotten generations. We have gathered it into our midst for hundreds of years, and it belongs to all of us who would call ourselves, as they did, New Yorkers. Cal Snyder is a Marine Corps veteran and 25-year New Yorker. This is his first book.

Cal Snyder served in Vietnam before finding his way into field biology and the American Museum of Natural History where he works in the Center for Biodiversity and Conservation. A passionate New Yorker, he lives not far from the 307th Infantry Memorial in Central Park.
Loading...
or
Not Currently Available for Direct Purchase